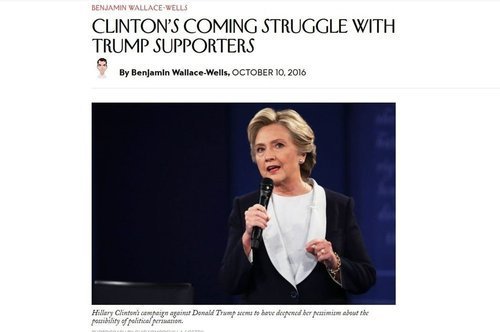 Originally published on VDARE.com on this day in 2016.

“My argument is not with his supporters. It’s with him,” Hillary Clinton said last night at the Presidential debate in St. Louis, gesturing toward her opponent, Donald Trump. Clinton had been asked about her comment, at a private fund-raiser last month, that half of Trump’s supporters belonged to a “basket of deplorables,” and that some were “irredeemable”—including racists and white nationalists. (She later retracted the “half,” but stood by the general description.) Trump got a chance to vent a little bit. “She has hate in her heart,” he said.

That might turn out to be an important emperor-has-no-clothes line.

“When she said they’re irredeemable, to me that might have been even worse.” Clinton said she had apologized for the remarks, then denounced Trump’s “hateful and divisive” campaign, the “inciting of violence at his rallies,” and the “very brutal campaign” of words against minority groups, and one majority group, women. But she did not offer a new description of how many of Trump’s supporters fit into that basket of deplorables—if it wasn’t half, how many was it? And she didn’t say that they could be redeemed.

Everyone had been furious at Donald Trump during the three days before the debate—the leaders of his own party as much as anyone.

It’s almost as if the Establishment hates a large chunk of the citizenry.

But she also did not move to the center.

This has been part of the news of the past month. If Trump is incapable of turning away from his base, Clinton, who is very capable of compromise and moderation, has more quietly chosen not to turn away from hers. “The most progressive campaign in American history,” Elizabeth Warren called Clinton’s candidacy last week. Warren could have pointed to Clinton’s policies as evidence—the push toward debt-free college, for instance—but she just as easily could have spoken about the rhetoric of her campaign. When the race drew close in September, Clinton dispatched Warren, and Bernie Sanders—and the Mothers of the Movement, whose children died as a result of police

actions—to swing states. She dropped the moderate language about police shootings of African-Americans that she’d emphasized during the Convention and spoke more forthrightly about “implicit bias.” …

The nativism and darkness of Trump’s movement—the tens of millions of voters who still stand enthusiastically behind the candidate—are the major new force in American politics, and still haven’t been worked into the major parties’ politics. A hard turn against globalization, a more explicit racism and xenophobia, the weight of economic and cultural grievances: none of this is part of the Democrats or Republicans’ scheme. During the past few days, Republicans have been working to blame the election on Trump personally, convinced that Trumpism is a fever that has moved through their electorate but should pass quickly. If Clinton had a different disposition—Obama’s, say, or her husband’s—she might have used the question about “the basket of deplorables” as a way to cleave Trump from his supporters, to empathize with their alienation and sense of loss. She might have offered conciliation. But Clinton does not seem to think that Trumpism is a passing fever, however much elected Republicans wish it so. Last night, Clinton said that her quarrel was with Trump rather than his supporters. In a month, that may no longer be true.

In other words, Hillary shall have her reckoning with those voters who tried to deny her Her Precious, but not until she gets the full might of the government under her control.