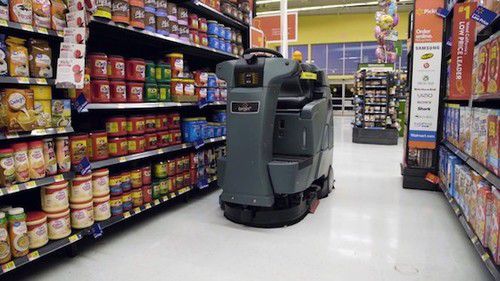 In November of 2017 it was reported that Walmart was trying out floor-scrubber robots in a few of its stores. That testing must have gone well because now the machines are part of a company decision to use technology “to help keep costs in check.”

Walmart’s robot floor cleaner scrubs and polishes all by itself with no worker required to guide it, as shown below:

In addition, Walmart has been using inventory robots to keep its shelves adequately supplied. The machines scan to see what is needed, but cannot physically stock the needed merchandise — yet.

The following article talks as if regular Walmart employees clean the floors and the robots will allow them more time for “customer-centric” work — don’t the stores have janitors for that chore?

In fact, industrial janitor is a job which many low-skilled immigrants take, so perhaps we needn’t continue importing them when so many such occupations will soon be done by smart machines.

The world’s largest retailer is making a growing bet on robots and artificial intelligence to gain a competitive edge.

Competition in the retail industry has never been more cutthroat. The dawn of e-commerce has caused a paradigm shift, with traditional retailers having to change with the times or fall by the wayside.

Walmart (NYSE:WMT) is representative not only of the old guard of retail, but also of the transition that is happening among brick-and-mortar stores to adapt to this new reality. In addition to a fierce move into e-commerce, the once-stodgy retailer has embraced cutting-edge technology to help keep costs in check and provide a better shopping experience for its customers.

Case in point: Self-propelled robots are now taking on an increasing role in Walmart’s operations. 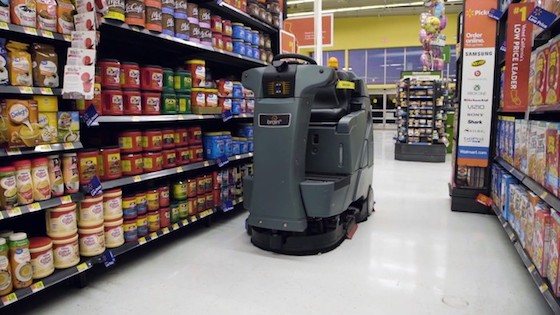 The coming of the ‘bots
Walmart recently revealed it’s bringing self-driving robots powered by artificial intelligence (AI) to its stores to handle the mundane task of floor cleaning. The Auto-C — Autonomous Cleaner uses assisted autonomy as it navigates around Walmart stores, employing a variety of lasers, cameras, and sensors to scan its surroundings for people and obstacles. This technology allows the self-driving robots to function effectively and safely in complex, crowded environments, which leads to increased productivity and efficiency.

This often-overlooked chore would typically take Walmart associates (what the retailer calls its employees) about two hours per day, on average. Multiply that by more than 11,000 stores worldwide and that’s a lot of time cleaning floors. Having a robot complete the task frees up Walmart employees for other, more customer-centric tasks.

The self-driving floor cleaners were initially tested in about 100 Walmart stores, and the company recently expanded that rollout to 360 stores. (Continues)