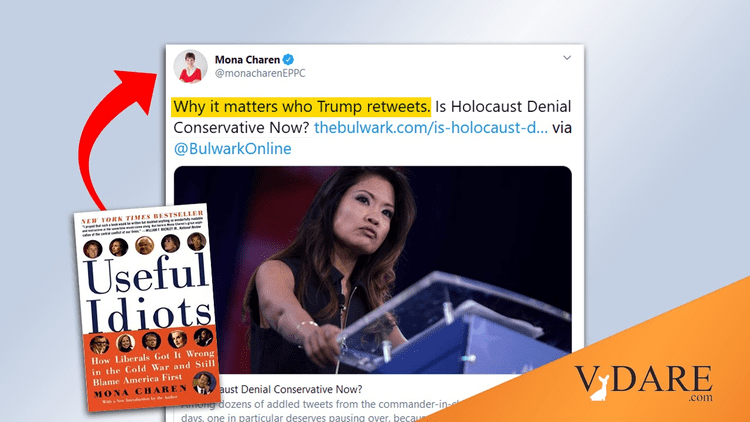 Mona Charen attacked Michelle Malkin with this Tweet, which links to her piece at the Neocon, NeverTrump outlet The Bulwark:

Why it matters who Trump retweets. Is Holocaust Denial Conservative Now? https://t.co/OquWDbyzuM via @BulwarkOnline

3/3 Many thanks for this from heroic @michellemalkin!"They want me to disavow Nick Fuentes and VDARE and Peter Brimelow and Faith Goldy and Gavin McInnes and the Proud Boys and Steve King and Laura Loomer...Amy Wax, Darren Beattie, Jason Richwine, Steve Sailer."

Michelle's speech, which Trump re-Tweeted, was not delivered at the Groyper meeting, but at an impeccably Conservatism, Inc. conference in Colorado, where people like Sarah Palin have spoken:

Charen's piece Is Holocaust Denial Conservative Now? Trump’s no-enemies-to-the-right mentality has made it impossible for the right to police itself, The Bulwark, May 20, 2020, starts by calling Michelle "disgraced columnist Michelle Malkin," repeats the "very fine people" libel about Trump supporting "neo-Nazis" after Charlottesville, et cetera, and goes on to say that Michelle, having been deplatformed by Conservatism, Inc for association with the young conservatives calling themselves the Groypers, ought to be deplatformed by everyone, including the President.

Charen also harks back to Michelle's 2004 In Defense of Internment to hint that Michelle was always a bit crazy. (In October 2001, Charen  said that "There are thousands of Arabs in the United States at this moment on student and travel visas. They should all be asked, politely and without prejudice, to go home.")

But the whole thing is about conservatives being able to police themselves, which has always been a way of losing, going back to William F. Buckley and the John Birch Society. (The Birchers, a grass-roots anti-Communist organization, were accused by Buckley of being conspiracy theorists—in 2008, he reported gleefully in Commentary Magazine that he had conspired against them in 1964 [Goldwater, the John Birch Society, and Me, March 2008].)

But how "conservative" was Charen, ever? In 2012, she was one of the many "Useful Idiots" in Conservatism, Inc who took the side of George Zimmerman's attacker. [Trayvon and the Good Victim, TownHall.com, March 30, 2012]

In 2015, she was one of the many, many,  NeverTrump maniacs at National Review, writing Contra Trump, It’s Not Illegal Immigration That’s to Blame for America’s Decline, August 21, 2015, in which she declared illegal immigrant crime a "myth". She continues to believe this, writing Good, Bad, and Emotional Arguments about Immigration, NR, March 22, 2017, which Federale blogged on under the heading NR's Mona Charen Goes Cultural Marxist On Those Who Oppose Illegal Aliens—Don't Mention The Rapes!

Her most famous act of non-conservatism—or loyalty to Conservatism, Inc. NeverTrumpers—was when she chose to attack the Conservative Political Action Conference from the CPAC stage itself for inviting French populist politician Marion Le Pen in 2018. At the same time, she revived sexual assault accusations against Trump and Roy Moore.

The crowd's reaction to her vitriol was so intense that she had to be escorted out by security. [WATCH — ‘NeverTrump’ Columnist Booed, Escorted Out With Security After Calling Marion Le Pen CPAC Invite ‘A Disgrace,’ by Raheem Kassam and Oliver Lane, Breitbart, February 24, 2018].

Charen was immediately rewarded for what I can only describe as her treachery—she can't have told organizers what she was going to do—with space on the NYT Op-Ed page: I’m Glad I Got Booed At CPAC,  February 25, 2018.

What this means is that she's no longer any kind of conservative, and in a sense, she never was.

Gatekeeping is now over.