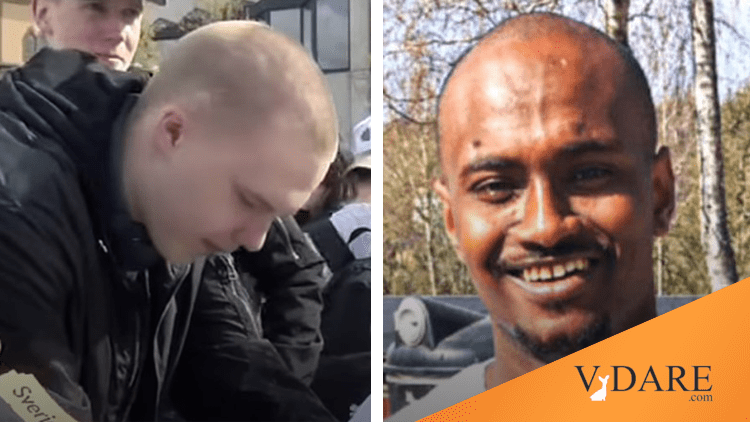 His Name Is Tommie Lindh: 19-Year-Old Swede Murdered by African Migrant When He Tried to Stop Him from Raping a Swedish Girl

The name Tommie Lindh deserves to be shared across what’s left of the Western world.

For those who still wish to see the perpetuation of western civilization must find in his final actions on this earth a courage worth remembering and sharing.

That’s not right. 19-year-old Tommie Lindh was a man against time, daring to defend his people against the onslaught of tomorrow.

He is a hero too few will remember, and even fewer will forget.

Sweden: Sudanese migrant arrested for raping girl and killing teenager who tried to intervene, Voice of Europe, May 15, 2020

Police in Sweden have arrested a Sudanese migrant who’s suspected of raping a woman and murdering the Swedish teen who attempted to stop him.

According to a report from the Swedish news portal Samhällsnytt, Mohamed stabbed 19-year-old Tommie Lindh to death in a Härnösand apartment when Lindh attempted prevent him from raping a female acquaintance.

On Wednesday, the 22-year-old suspect denied the crimes he’s been charged with at a hearing at the Ångermanland district court. Following the hearing, Chamber Prosecutor Stina Sjöqvist told Swedish broadcaster SVT that Abubaker Mohamed is also suspected of committing two rapes, one gross and another of the “normal degree” against a victim the same Sunday the murder was committed.

Days ago, Voice of Europe reported that a Kurdish migrant living in Sweden was charged with murdering his 17-year-old girlfriend, Wilma Andersson, after her head was found in a suitcase in his flat.

On May 2nd, a Swedish court ordered the expulsion of Afghan asylum seeker after finding him guilty of brutally raping a 14-year-old girl in Jönköping, Voice of Europe reported.

Days later, on May 8th, Voice of Europe reported on a 16-year-old Jordanian migrant was sentenced to time in a juvenile detention facility after being convicted of ten separate crimes, including the rape of a 13-year-old girl in 2019.

His name is Tommie Lindh. He was a 19-year-old Swede, a white teenager who dared intervene when an African immigrant tried to rape a fellow Swede, and was stabbed to death for his heroism.

His story will be told by few in the European Union and even fewer in the United States of America (or the United Kingdom).

But he got off of his knees and dared defend both his ancestors and his posterity by standing up for a fellow Swede who was being raped by an African immigrant. He would still be alive today if the elite of his country, in control of immigration policy, had put the interests of the Swedish people ahead of egalitarian concerns.

Say his name. Remember it. Remember what he tried to stop, for his final actions (and the lack of interest in how he died) on this earth are highly symbolic of what’s happened to western civilization.