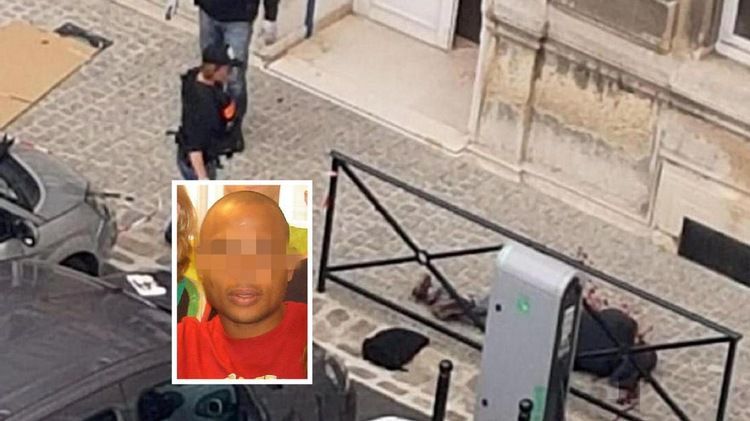 The stabbing in Paris, where a police employee named Michael Harpon, born in "the French Caribbean overseas department of Martinique," i.e. a French-owned island where the populace is only 5 percent white, seemed to be what we call a Disgruntled Minority Massacre, in which a member of a minority group kills his mostly white co-workers because they're racist.

Some news sources pointed out that Harpon was a "recent convert" to Islam, an obvious motive for stabbing French cops, but I also noted the Martinique angle. Harpon  was actually a French citizen, because Martinique is part of France in the way Hawaii and Puerto Rico are part of the United States, and everyone knows that people from Hawaii and Puerto Rico are one hundred percent American.

But of course, Harpon might have been a white Martinican, but the photograph above, a composite of his death scene, with totally blurred face, and a picture of him alive with slightly blurred face, confirms that he was, like most Martinicans, of African descent. In several cases where blacks have run amok and killed white co-workers because of claims of racism, the deceased are investigated to see if the killer was right.

Perhaps that can be avoided in this case, because the media isn't really admitting the culprit had any motive at all. A reader forwarded this WSJ story with the note "Even WSJ fails to name Paris police stabber, and comments suppressed."

An administrative worker with the French police stabbed and killed four officers at the Paris police headquarters before he was gunned down https://t.co/nOfQP1rUk9

Here's the WSJ's coverage, before the subscriber login:

An administrative worker with the French police stabbed and killed four officers at the police headquarters on Thursday before he was gunned down.

The attacker worked in the headquarter’s information-technology department, a police officer said, adding that police suspect the attack stemmed from a workplace dispute.

Sure, but if the "workplace dispute" means he thought they were racist, that would be an anti-white hate crime, something they haven't got a mental category for.

One more note, a personal obsession of mine: Harpon, a civilian employee of the French police, is reported to have used a ceramic knife, not detectable by metal detectors, in his attack.

If the French police headquarters has metal detectors, does that mean that the actual police officers were unarmed inside it? This frequently happens in American Federal police buildings, and almost always happens on US Army bases.

Aside from being another "Disgruntled Minority Massacre," is this another "Death In The Gun-Free Zone"?

UPDATE: A reader sends in these two pictures of Harpon, via French media. At right, a full face shot. Below, Harpon poses with mostly female co-workers, in a position that might prompt one of the women to call human resources—which would be racist: