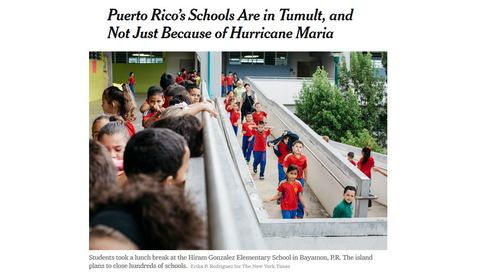 With Puerto Rico in the news, I wanted to reiterate something that I’m about the only pundit in America to ever mention: Puerto Rico has unbelievably bad public schools.

The federal government has put a fair amount of effort into adapting and validating its NAEP school achievement test for the special challenges of Puerto Rico’s schools (e.g., Spanish and the questions need to be easier). Public school students in PR are in a world of their own for incompetence.

NAEP scores are grouped as

Here’s the 2017 NAEP Math scores of 8th graders for the worst-scoring states in the U.S. plus PR. Even in DC, Louisiana, Alabama, and New Mexico a slim majority of public school students score at least Basic. (Nationally, 69% reach at least Basic.) But in PR, only 9% reach Basic. So 91% are below Basic.

And the number in Puerto Rico to score as Proficient (much less Advanced) rounds to zero percent:

Nationally, Hispanics don’t do all that well on average:

but they do an awful lot better than in Puerto Rico: 57% of Hispanics nationally score Basic or above, vs. 9% in PR. I would guess that Puerto Ricans in the fifty states score below the average for Hispanics, but still …

When I looked into this in 2015, in Puerto Rico 23% of students attended private schools vs. 10% nationally, so that accounts for some of the gap.

My impression is that PR pays teachers badly, but spends a lot on administration.