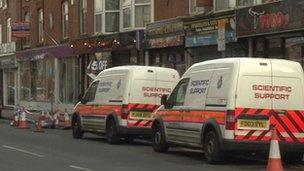 John Derbyshire’s light-hearted blog yesterday The Pussification Of Sikhism belies the fact that he himself has stipulated eloquently to the courage of the Sikhs. And after all it was a Sikh who had the steel to mention immigration at the GOP Romney coronation in defiance of the ruling campaign consultants. (Although Sikhs can be difficult neighbors.)

That their ancestors would not be ashamed of them is shown by news from Leicester, England: The Sikhs who fought back against #RapeJihad are now facing trial

A group of Sikh men trashed a Muslim restaurant in revenge for Muslims raping Sikh girls, after feeling frustrated at the lack of police action. The dhimmi police, as usual, tried to cover up what was going on and said the attack was “fueled by false rumours”. The rumours weren’t false at all. The police lied, again. The Muslims eventually went to trial and were found guilty. Now the Sikhs are the ones on trial, for trashing the rapist’s restaurant after police tried to cover things up.

#RapeJihad is a remarkable site, as I have noted here and here. For some reason you have to scroll down quite a bit to get the current postings. Fathers of daughters should brace themselves: it is a sickening collection.