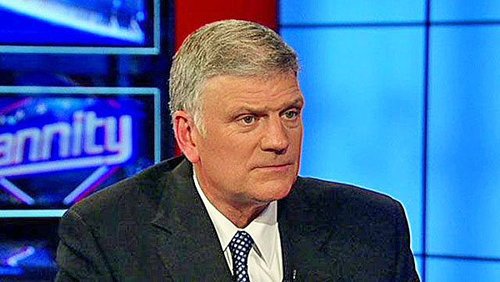 Unlike The Soros Evangelicals, Evangelist Franklin Graham Calls for a Halt on All Immigration

Evangelist Franklin Graham is the son of Billy Graham.   In contrast to the Soros Evangelicals of the Evangelical Immigration Table,  Franklin Graham has called for a halt on all immigration.  And his comments indicate he understands that the border is not secure, and that our government's responsibility is actually to protect Americans.

Franklin Graham, who heads up the Billy Graham Evangelistic Association and the worldwide charitable Samaritan’s Purse nonprofit, went on CNN television and doubled down on previously expressed views that America should halt immigration for the time being.   He also asked for those of faith to join him in praying for the safety and future of America. Franklin Graham: Halt ALL immigration to U.S.   By Cheryl Chumley, World Net Daily,  Dec. 16th, 2015

Good for  Franklin Graham.  Once again, this is a real contrast to the Soros Evangelicals.

.... on immigration, Graham said America needed to walk carefully and think twice about letting strangers into the nation.    “I think we should put a halt on immigration because our borders are broken, until we have a proper system to vet people,” he said to CNN’s Carol Costello. “I think all immigration, but especially those coming from the Middle East right now.”

On CNN, Graham said he “loves Muslims” and “works with Muslims,” but “ government, the president, our Congress” all have “a responsibility to protect all Americans,” he said.   According to Raw Story, he also went on: “We know what happened on 9/11. We have been at war and we have thousands of Americans that have been killed, over 11,000 since 9/11. And I think we should take all the precautions we can to protect our citizens.”

CNN’s Costello then asked if Graham thought Islam was “compatible with American values,” the video showed. And Graham’s response?    “I don’t think so,” he said.