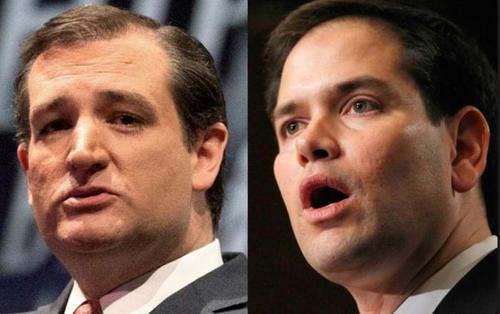 [See Also: Trump the Unstumpable Has Best Night Yet, But So Does Cruz as Rubio Wounded on Amnesty]

One of the most fascinating parts of the recent  GOP Debate was the testy exchange between Ted Cruz and Marco Rubio on immigration. Marco Rubio, FOR THE FIRST TIME IN ANY GOP DEBATE, was finally asked about his support for amnesty. He tried to evade and Ted Cruz pounced on him. But was Cruz himself being evasive?

Rubio's case was that Ted Cruz also supported amnesty for illegal aliens currently in the country but was being evasive about it. (Of course, that's why most immigration patriots are rallying to Donald Trump.) Cruz, for what's it's worth, denied these charges. But look at how Cruz phrased it.

Cruz supported a 500% increase in the number of H1b guest worker visas, Rubio said, and wanted to double the number of green cards available. At the end of the back-and-forth, the Florida senator pinned down his colleague from Texas — asking Cruz whether he plans to support legalization of any sort for immigrants already living in the United States.
“Just rule it out,” Rubio said.
Cruz responded: “I have never supported legalization, and I do not intend to support legalization.”

['Do Not Intend': How Three Words From Cruz on Illegal Immigration Set Off Conservative Alarm Bells, by Leigh Munsil, The Blaze, December 16, 2015]

Do not intend? What is that?

As even The Weekly Standard commented:

Cruz's answer — "I have never supported legalization, and I do not intend to support legalization" — is downright Clintonian in its evasiveness. And this is not the first time Cruz has ducked the question:

On Sunday, Cruz was asked by NBC News twice on whether he would take legal status off the table in immigration talks.

"The focus of the press and the focus of the Democrats is always on those people who are currently here illegally," Cruz responded. "So my view is, first, we secure the border. We don't have to secure every aspect of immigration all at once."

[On Immigration Debate, Who's Being More Honest: Cruz or Rubio? by Mark Hemingway, Weekly Standard, December 16, 2015]

Cruz has a reputation for almost sociopathic calculation. This is both good and bad. On the good side, it means that he will respond to political pressure (and might even be willing to stab his donors in the back, as one self described "insider" in his campaign assured me.) On the other hand, it also means he has a love for word games and will be quite willing to break his promises on border security if he sees advantage. Immigration patriots must be cautious when it comes to Cruz, who is, for now anyway, Trump's most formidable challenger.