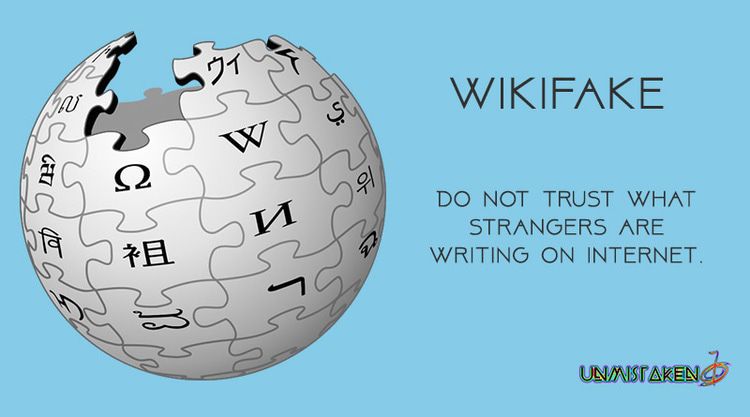 Truth Visits The Wikipedia VDARE.com Page, Gets Thrown Out On Its Edit By WikiThugs

I don’t get out much these days, if I don’t have to. I have to keep my babies rolling in steaks, TP, and soap, so that necessitates some trips to the Store Formerly Known as Waldbaum’s, and to the national chain drug store which has been swallowed up by another national chain drug store. Otherwise, I have my books and movies and music and TV and the Internet, and every few days, UPS or the USPS brings new books, movies, and music.

However, Peter Brimelow asked that I voyage to a dangerous place. I call it The Pretend Encyclopedia (TPE); others call it Wikipedia.

Actually, I had gone there on my own, but I only do that a few times a year, if I can help it. I get fed up with this or that outrage by the communists running the joint, and make a modest correction, which one of them immediately “reverts.”

Their reversions always constitute vandalism, but they would call me a “vandal.” They are vandals, because they enforce lies and racism, and automatically revert (and frequently ban) anyone who seeks to tell the truth, or expose and fight racism.

On paper, the place has a million “policies and guidelines”: Be bold; AGF (Assume good faith); NPOV (Neutral point of view); PA (No personal attacks); BLP (Biographies of living persons); CIV (Civility), etc., but in practice, it has none. If you are part of the ruling, communist clique, you may violate the rules with impunity, while making false charges against those on TPE’s Enemies List. Thus does TPE increasingly resemble institutions such as the law, the press, and the antiversity in today’s world of anarcho-tyranny.

Over the past two months, I had been venturing down Pretend’s mean, virtual streets more than usual, due to the death of John Tanton (1934-2019), the greatest American of his generation.

Dr. Tanton, a small-town Michigan opthalmologist, founded America’s modern immigration reform movement, when he saw that the environment and America were bound to be destroyed by mass, Third-World immigration. Admirers called him the “Johnny Appleseed” of the immigration reform movement, due to his practice of donating seed money to found organizations (the Federation for American Immigration Reform, U.S., Inc., U.S. English, The Social Contract Press, Pro English, the Center for Immigration Studies) that then flourished on their own. Enemies were, well, less charitable. “The Puppeteer.” “White nationalist.” You get the idea.

At TPE Dr. Tanton’s page, like that of VDARE.com, has in recent years been turned into an attack page based on slanders from the racist, scandal-plagued, frequently debunked SPLC. However, at TPE, the SPLC, whose publications are all glorified fund-raising letters, is treated as if it were the gold standard of journalism, scholarship, and morality.

(On August 27, one of the WikiThugs, Bradv, put Dr. Tanton’s page under “protection”: “Protected ‘John Tanton’: Persistent disruptive editing” That was in response to yours truly having made three modest edits, removing its inflammatory language. Now, only trusted liars, traitors, and racists have access to edit the page.)

That page was originally written by old immigration hand Fred Elbel, the scholar and blogger who founded CAIRCO, the Colorado Alliance for Immigration Reform, but it does not at all resemble the original version, and there’s nothing Fred can do about it.

You’d never know, to read TPE, that the SPLC was completely disgraced earlier this year. Then again, you wouldn’t know it, to read the New York Times, either.

“VDARE is an American website focused on opposition to immigration to the United States and is associated with white supremacy, white nationalism, and the alt-right.”

That’s TPE’s lead for its entry on VDARE.com (as I write). And they expect people to treat it like an encyclopedia article!

“The group has been described as white supremacist.”

The page has virtually nothing about the actual writings published at VDARE. It consists of libels published about VDARE by the racist, treason site, the SPLC. Just try filling up the SPLC’s TPE page with criticisms of its operations, even though The Social Contract (founded and, for many years, published by John Tanton) published an issue last year that is the equivalent of a 400-page book devoted to exposés of the SPLC.

Not that people (including yours truly) haven’t sought to make TPE’s VDARE.com page actually be about VDARE.com, but the Wikithugs always immediately revert any honest, decent changes. (They get pings, whenever a page they own gets edited, or whenever anyone on their Enemies List edits something.)

Once or twice a year, I would make modest corrections, e.g., removing the instances of “white supremacist,” “white nationalist,” and “anti-immigrant/immigration,” and replacing the latter with “immigration reform.”

Sometimes, less than a minute would pass, before one of the racist Reds would revert me.

The Wikithugs are so contemptuous of everything a real encyclopedia stands for that they even got basic facts wrong, and maintained their wrongness, e.g., asserting for years that Peter Brimelow worked at Fortune, rather than Forbes.

On September 5, just for the record, I undertook a more ambitious correction, even though I knew it would quickly be struck down. Its lead goes,

VDARE is an American Webzine focused on patriotic immigration reform. It was established on Christmas Eve, 1999, by Editor-Publisher Peter Brimelow….

In my explanation of my edit, I wrote, “BLP, Undue [weight], NPOV… is there a WP rule this entry didn’t break? I don’t know if this is obscene, or a parody.”

Corrected version: Wikipedia uses a maximum of constant censorship, and is lousy with pornography, though the majority of the latter is tucked away on Wikimedia Commons.

Currently, TPE is the world’s fifth most popular Website. Students and media operatives use it to plagiarize its entries, corporate mischief-makers and their subcontractors use it to enhance their companies and harm their rivals, and it functions as a libel factory for racist organizations like the SPLC and ADL, and TPE’s Red Brigades.

I have some ideas for solutions to the problem of TPE, but can’t discuss them at VDARE, because laws.