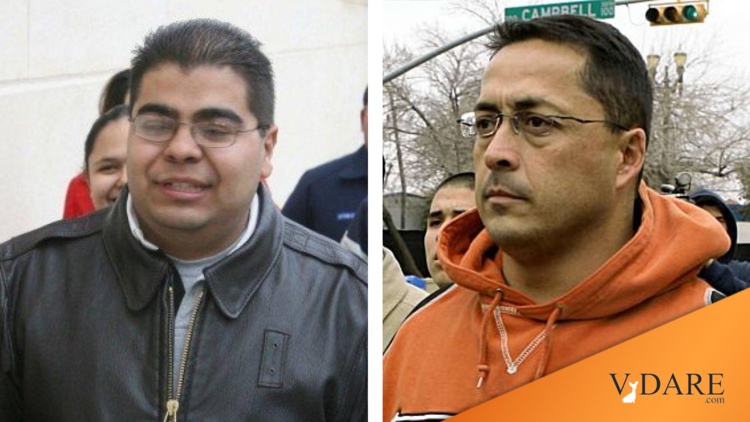 Earlier: A Christmas Miracle—President Trump Commutes Steve Stockman's Sentence and Flynn Just The Start—Trump Can Hit Back At The Ruling Class By Pardoning Stockman, Snowden, And Assange

President Trump has pardoned Border Patrol Agents Ignacio Ramos and Jose Alonso Compean, which is something we've been calling for since the Bush Administration, when they were sent to jail on the basis that drug smugglers must not be injured while resisting arrest.

Why were Border Patrol agents Ignacio Ramos and Jose Alonso Compean prosecuted with such ferocity for doing their jobs that they now face up to 20 years in prison?

As Ramos and Compean await their fate, drug smuggler Osvaldo Aldrete-Davila received immunity. As a free man living in Mexico, Aldrete-Davila plans to sue the Border Patrol for $5 million for alleged violations of his civil rights suffered while transporting 743 pounds of marijuana across the border.

Briefly, Ramos and Compean were charged for firing at Aldrete-Davila as he fled back across the border and not reporting the incident.

Aldrete-Davila wasn't killed, by the way, he was injured in the rear end, without major negative effects, as far as I can tell--see Butt-shot Career Drug Smuggler Aldrete-Davila Indicted by Brenda Walker.

The official announcement from the Trump White House said;

Mr. Ramos participates in numerous community activities and charities, and Mr. Compean is active in his local church.

Both men served as Border Patrol Agents and put themselves in harm’s way to help secure our southern border with Mexico.  On one such occasion in 2005, they stopped an illegal alien trafficking 700 pounds of marijuana. When the illegal alien—who was thought to be armed—resisted arrest, Mr. Ramos shot the suspect, who fled back across the border.  For this, Mr. Ramos and Mr. Compean were charged and convicted of assault, using a firearm during a crime of violence, and deprivation of civil rights.  After they were sentenced to 11 and 12 years imprisonment, respectively, their case gained widespread attention.

One hundred members of Congress, as well as the organizations above, supported Mr. Ramos’ and Mr. Compean’s release from prison. The Senate Judiciary Committee held hearings on the excessive sentence imposed on the former agents. And President George W. Bush ultimately commuted these sentences with strong bipartisan support.

While many conservatives objected to the Bush Administration's railroading of Ramos and Compean, National Review's former Federal Prosecutor Andrew McCarthy was all in favor of it:

Law enforcement defends its honor, despite the “hero” propaganda

So was immigration enthusiast John J. Miller in National Review's Corner blog. We wrote at the time (2007) that "John Derbyshire, predictably, has more normal reactions."

Also predictably, he was fired from National Review in 2012—for having normal reactions.