Will the shameful case of wrongful imprisonment for Border Patrol agents Ramos and Compean turn out to be the Mexichurian Watergate?

It's clear that the Bush administration acted to please Mexico by smacking down the Border Patrol in prosecuting two of its finest for simply doing their jobs. Drug cartels must have done cartwheels over the way their boy Osvaldo Aldrete-Davila (shown below) was treated, i.e. given a government-issued border-crossing card that he used to smuggle further loads of drugs. For criminals, it doesn't get any better than that. 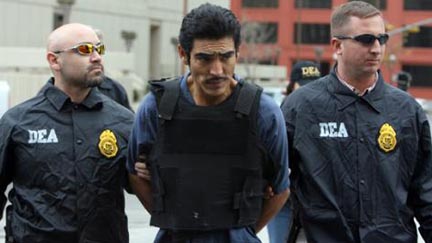 But today's news is the renewed effort to get Agents Ignacio Ramos and Jose Compean out of prison and reunited with their families on the occasion of Aldrete-Davila's indictment.

We have heard that President Bush is a big friend of family reunification, so he should regard pardoning the officers as an opportunity to practice compassionate conservatism.

Top conservatives have joined ranking House leaders in their bid to pressure the president to pardon two jailed El Paso Border Patrol agents for the nonfatal shooting of a Mexican drug smuggler in 2005.

In a letter to be delivered tomorrow to the White House, 31 major conservative petitioners joined a campaign being led by Rep. Duncan Hunter, California Republican and presidential candidate, to ask President Bush to pardon Ignacio Ramos and Jose Alonso Compean before Thanksgiving.

The letter comes on the heels of the arrest of admitted drug smuggler Osvaldo Aldrete-Davila on charges of trafficking marijuana while he was profiting from the federal-immunity deal as the star witness in the shooting case against the agents.

"History has proven that the mere words and deeds of a president can change the course of history and profoundly affect both the tone and direction of the nation"s moral character for generations to come," said the letter signed by 31 petitioners, mostly from Christian conservative groups and national security organizations. [Pressure mounts to pardon Border agents, By Sara A. Carter, Washington Times, November 18, 2007]