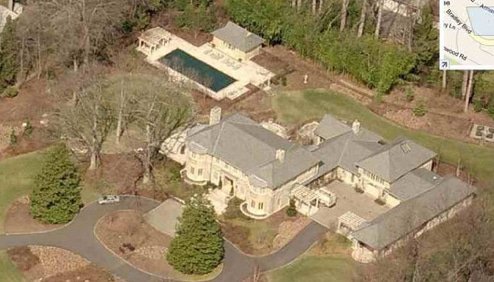 Tom Friedman: "Bonfire of the Assets, with Trump Lighting Matches"

Above, a picture of NYT columnist  Tom Friedman's house.

From the NYT business section:

His political platform is based largely on his business acumen, but Donald J. Trump is making a habit of rankling the business world with his ideas on trade and taxes.

On Wednesday, the conservative Club for Growth took issue with Mr. Trump’s proposal to increase taxes on companies such as Ford when they source parts or make cars in countries like Mexico. The billionaire real estate developer suggested imposing a 35 percent tax on the carmaker as a penalty for such behavior.

“It should thrill liberals and Democrats everywhere that Trump wants to create new taxes and start a trade war to force American companies to work where he demands,” said David McIntosh, president of the Club for Growth. “Instead of lowering corporate taxes, cutting unnecessary regulations and fostering a more profitable environment in the U.S., as some Republican candidates have proposed, Trump wants to unilaterally threaten a major U.S. manufacturer with higher taxes.”

Mr. Trump has also been critical of hedge fund managers and the favorable tax treatment they receive. Calling them “paper pushers” who he says often just get lucky in making their money, Mr. Trump said last weekend that their taxes should be higher while the middle class should have their taxes reduced.

Hedge funds are not the only business groups that Mr. Trump has singled out. This month he lamented corporate “inversions” — when an American company acquires an international company so it can relocate its headquarters to a country with a lower tax rate.

“They have no loyalty to this country,” Mr. Trump told NBC. “And we have to do something.”

Similarly, Trump rejects the usual Republican candidate panacea of the flat tax. He says he’s for simplifying the income tax, but he’s not for imposing the same marginal tax rate on everybody, presumably because he believes billionaire guys like him can afford to pay more than the rest of us can, even though hedge fund guys currently seem to pay a lower tax rate than pillars of the community-types.

Also from the NYT, Tom Friedman (has his father-in-law regained his billionaireness yet that he lost in the unfortunate events of 2008?) blames Trump for whatever it is the stock market is doing:

Bonfire of the Assets, With Trump Lighting Matches AUG. 26, 2015

Normally, when your main geopolitical rivals are shooting themselves in both feet, the military manual says step back and enjoy the show. But I take little comfort in watching China burning money and Russia burning food, because in today’s interdependent world we’re all affected.

I also find no joy in it because we Americans, too, have started burning our most important source of competitive advantage — our pluralism. One of our two political parties has gone nuts and started following a pied piper of intolerance, named Donald Trump. …

And now we have Trump shamelessly exploiting this issue even more. He’s calling for an end to the 14th Amendment’s birthright principle, which guarantees citizenship to anyone born here, and also for a government program to round up all 11 million illegal immigrants and send them home — an utterly lunatic idea that Trump dismisses as a mere “management” problem. Like lemmings, many of the other G.O.P. presidential hopefuls just followed Trump over that cliff.

This is not funny anymore. This is not entertaining. Donald Trump is not cute. His ugly nativism shamefully plays on people’s fears and ignorance. It ignores bipartisan solutions already on the table, undermines the civic ideals that make our melting pot work in ways no European or Asian country can match (try to become a Japanese) and tampers with the very secret of our sauce — pluralism, that out of many we make one.

Every era spews up a Joe McCarthy type who tries to thrive by dividing and frightening us, and today his name is Donald Trump.

One meta-idea I’ve been trying to push is:

Due to diminishing marginal returns, a successful policy philosophy in one era can run out of gas in another era.

Forty years ago, for example, capitalism was on the defensive and capitalists were depressed. The Dow Jones average began 1975 at 652.

But when one set of problems gets partially fixed, that tends to make a different type of problem more salient. That seems pretty obvious in the abstract, but it’s hard for Americans to moderate their past views to deal more realistically with current realities because they feel like that would be admitting the other guy was right back then. (Perhaps this stasis has a little bit to do with the endless domination of Baby Boomers?)

But that hardly is inevitably true? Why? Because times change.

If in 1975 hedge fund guys were feeling depressed and unloved, policies that made them feel more encouraged and optimistic made sense.

But that doesn’t mean we have to keep on cutting hedge fund guys’ taxes forever.

Similarly, it’s not 1955 forever when it comes to race, but liberals try to get us to mentally live in the past to justify their More of the Same policies.

I tended to be on the winning side of policy debates in the years after 1975, and the policies I had advocated mostly worked out well, often (e.g., standing up to the Russians) extraordinarily well.

But that doesn’t mean the lesson ought to be More of the Same Forever.

Trump, with his life-long study of getting on free TV by saying things that are current and interesting, has picked up on the fact that there has now emerged a reasonably coherent counter-philosophy to the Clinton-Bush bipartisan globalist consensus haze: