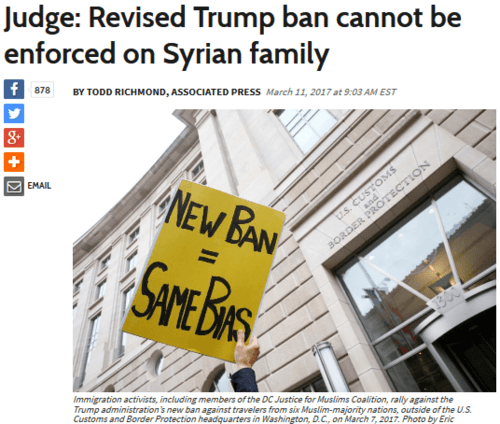 Inevitably, a federal judge (William M. Conley, nominated by Obama) is trying to block President Trump’s revised travel ban [Judge: Revised Trump ban cannot be enforced on Syrian family, by Todd Richmond, AP, March 11 2017]. This is just the next shot in what is obviously going to be a long war, not just over whether judges get to decide immigration policy but over the overall role in a democracy of our increasingly arrogant imperial judiciary. A little-noticed U.S. Supreme Court decision last week shows just how arrogant, and lawless and Cultural Marxist, our Leftist Kritarchs have become.

This is a group where those who most often exhibit racist and sexist behavior — white males — can begin to be self-critical of the very dangerous, brutal, and depraved hierarchical pathologies of superiority, supremacy, and inferiority handed down to us by white Euro-American institutions … The main topic for discussion will be an ongoing one: How do we deal with the depravity of whiteness and the brutality of masculinity? How can we get to the root of this problem?

Well, this SCOTUS story manages to contain elements of both "the depravity of whiteness" and "the brutality of masculinity."

The Brutality Of Masculinity showed itself in May of 2007 when a Hispanic male person entered the ladies' rest-room of a horse-racing track in Colorado. This, I should make clear, was back in the dark days of ten years ago, before we entered the present enlightened age in which it is perfectly fine for men to use women's restrooms—in which, indeed, it would be a scandalous violation of a man's civil rights to try to stop him doing so.

Well, there were three girls in the restroom, ages 14, 15, and 16. The 15-year-old left when the man came in. The man then imposed himself on the other two, trying to stroke and fondle them. They fled and the police were notified. 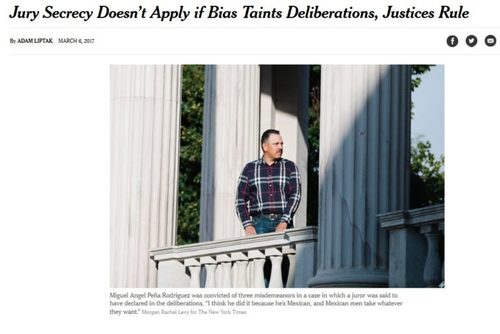 In due course Miguel Angel Peña-Rodriguez, a worker at the racetrack, was identified by the girls as the man they had fled from. Peña-Rodriguez was tried at jury trial, where he produced a witness, also Hispanic, who provided an alibi for him. The jury didn't believe the witness, so Mr. Peña-Rodriguez was found guilty on three misdemeanor assault charges, sentenced to two years’ probation, and registered as a sex offender.

So far, so small-potatoes police-blotter stuff.

However, Mr. Peña-Rodriguez hung around after the jurors had been dismissed and chatted with them. He heard that one juror, formerly a law-enforcement officer, had opined in the jury room that from his experience, Mexican men believed they could do whatever they wanted with women, that they were chronically aggressive toward women and young girls, and that the alibi witness was an illegal alien and therefore not credible.

That started off a chain of appeals. Colorado, along with other states, has a rule that what happens in the jury room stays in the jury room; that there can't be endless after-the-verdict second-guessing about what went on in jury deliberations, or else the courts would do little else. Rules of this kind are called "no-impeachment rules." The word "impeachment" there has the meaning "calling into question a jury's decision based on testimony about what was said in the jury room."

Mr. Peña-Rodriguez argued that this Colorado rule had violated his right to an impartial jury as guaranteed by the Sixth Amendment.

The Colorado Court of Appeals and the Colorado Supreme Court slapped him down. But he pressed on. At last the U.S. Supreme Court heard the case, and Monday this week they handed down their judgment. Here it is, actual quote:

When a juror makes a clear statement indicating that he or she relied on racial stereotypes or animus to convict a criminal defendant, the Sixth Amendment requires that the no-impeachment rule give way in order to permit the trial court to consider the evidence of the juror's statement and any resulting denial of the jury trial guarantee.[Pena-Rodriguez v. Colorado]

I know, this sounds like a lot of jurisprudential inside baseball. But look at what SCOTUS did there. Translation into plain English:

"Sure, the no-impeachment rule is essential to prevent the legal process gumming up with endless second-guessing of jury decisions based on what one juror thought he heard another juror say in the jury room. But essential as the rule may be, rooting out racial bias is more important!"

The Court has declared:

"As horrific as it would be for the courts to seize up under a flood of cases second-guessing jury decisions, if our diversity becomes a casualty, that would be worse."

Let’s put aside the Hate Fact that, as Ann Coulter demonstrated in Adios America!, Mexicans are in fact peculiarly prone to molesting underage girls.

And I'm even leaving aside the fact that the alleged statements by the juror in this case referred to Mexicans and illegal aliens, neither of which is a race. Aren't legal minds supposed to use words with fine, scholarly precision?

I guess I'm just showing my white privilege there.

This was a 5-3 decision, with Justices Alito, Roberts, and Thomas all dissenting. [Jury Secrecy Doesn't Apply if Bias Taints Deliberations, Justices Rule , by Adam Liptak, NYT, March 6, 2017]. Justice Alito thought a bad precedent had been set, a watertight seal broken. He was actually quite apocalyptic about it, in his soft-spoken style: "It is questionable whether our system of trial by jury can endure this attempt to perfect it."

I would love to have heard the late Antonin Scalia's opinion.

The Court majority were blithe about the consequences. "Not every offhand comment indicating racial bias or hostility will justify" an investigation into jurors' deliberations, Justice Kennedy wrote cheerfully in the majority decision.

The court's Wise Latina stuck to the General Casey principle. Nothing, nothing, not even the destruction of the jury system, could be worse than holding negative opinions about Mexicans and illegals, said Justice Sotomayor: "There may be cases of juror bias so extreme that, almost by definition, the jury trial right has been abridged."

So there you are. Racial bias is the worst thing ever in the history of the world. Exposing it and suppressing the Depravity Of Whiteness justifies anything, anything—up to and including the destruction of Anglo-Saxon jurisprudence.

The U.S. Supreme Court says so. And it’s the Voice Of God.