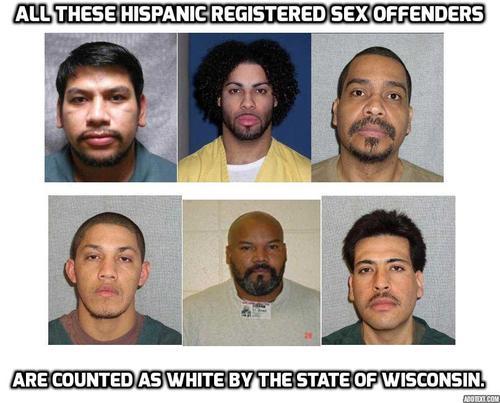 Hispanic Sex Offenders Listed As "White" In Wisconsin. Why?

On August 19, 2003, two Mexican farm laborers, possibly illegal aliens, committed arguably the most heinous crime in the history of Wisconsin's Green Bay. They abducted a 26-year-old woman from the parking lot of a Main Street nightclub, drove many miles to a remote area in another county, repeatedly gang-raped her, then doused her with lighter fluid and set her on fire.

"The woman testified she heard her attackers 'laugh, get in the truck, and leave.'" Fortunately or unfortunately, she survived but with "burns on 61% of her body", including her face. She will be grotesquely disfigured for life. She also "suffered" and survived, "respiratory failure". [Man Enters Pleas In Kidnapping, Rape, Milwaukee Journal Sentinel, April 7, 2005]

In non-diverse Green Bay, the victim, then a mother of two young children, can be assumed to be white, although of course the politically correct Wisconsin newspapers didn't say.

The two monsters: Gregario Morales, then 27 with a wife and three children, and Juan Nieto, 24, apparently the more vicious of the two and rumored to have possibly committed a similar rape/burning in Arizona. Morales was offered a plea bargain in exchange for his testimony against Nieto.

Their crime was featured on Fox TV's America's Most Wanted, which resulted in Nieto's arrest in December 2004. But otherwise it received no national coverage.

Morales had been apprehended a few months earlier in Dexter, NM. He was sentenced to 50 years in prison in 2005 and is now living at Waupun Correctional Institution, the state's first prison, built in 1852. Nieto was sentenced to 70 years in prison and is now incarcerated at Columbia Correctional Institution, a maximum-security prison in Portage in Southwestern Wisconsin.

I suggest that readers look at Morales and Nieto on Wisconsin's sex offender registry. Morales is clearly a mestizo. Nieto is a pure (or almost pure) Amerindian. He could have worked as an "extra" in Mel Gibson's movie Apocalypto. And given Morales' wiry hair and Nieto's dark skin, duskier than Obama's, it's possible that one or both of them could be 5-10% black. As Steve Sailer has noted, the average Mexican is 5% black. 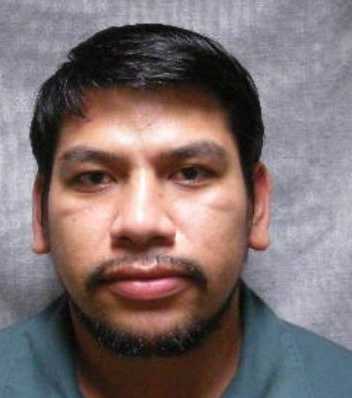 But according to the registry, both are "white".

Then do a generic search for offenders with common "Hispanic"/Spanish surnames -e.g., Lopez, Garcia, Hernandez, Rodriguez, Gonzales, Martinez, etc.- and marvel at all the mestizos, pure or almost pure Amerindians, "zambos" (a mixture of black and Amerindian), mulattos, and even blacks who are defined as "white"!

[VDARE.COM NOTE: Readers who are uncomfortable with all this physical anthropology stuff should be aware that these men all have an official racial government classification placed on their Sex Offender registry records by the State Of Wisconsin. The purpose of this is to provide a physical descriptionin case they escape. It's just factually inaccurate, and thus totally unhelpful to Americans.]

This in Wisconsin—land of Germans and Scandinavians.

And my search was not definitive. So there are probably over a thousand "Hispanics" in Wisconsin's sex offender registry, either incarcerated or supervised.

I opened the pages and saw the mug-shots of some 50-60 "Hispanic" sex offenders, all defined as "white", although very few were of pure Spanish descent. Most were mestizos, usually with their Indian genes dominant, and a large minority were pure Amerindians, "zambos", mulattos, or of pure or almost pure African descent. Look at Heriberto Rivera, another black defined as "white" and convicted of first-degree sexual assault of a child. Behold Mario Lopez, either a mulatto or a "zambo" with African genes dominant. And Francisco Lopez, who is a pure (or almost pure) Amerindian.

Check out Hector Martinez who, with his "kinky" hair and medium-brown skin, is either a mulatto or "zambo". And I looked at no more than 4-5% of perhaps 1100-1200 mug-shots. Looking at all or most of them would surely uncover many dozens of similarly bizarre and ludicrous examples of "white" Hispanics.

Why would bureaucrats define the likes of Morales and Nieto and all other nonwhites with Spanish surnames as "white" when anyone who visits the registry and looks at the mug-shots will see mestizos, Amerindians, "zambos", mulattos, and blacks—the faces of men who look like Pancho Villa, Zapata, Cesar Chavez, Hugo Chavez, George Lopez, Ozzie Guillen, David Ortiz, Manny Ramirez, Pedro Martinez, Albert Pujols, Sammy Sosa?

The only plausible explanation: nonwhite "Hispanics" who commit sex offenses and other felonies are classified as "white" under Dept. of Correction statistic—and, consequently, they must also be defined as "white" on the sex offender registry.

Even Politically Correct bureaucrats cannot lie and deceive when vivid and scary images are available of "white" sex criminals who are glaringly nonwhite. But they can can, with false definitions and resultant bogus numbers, whose purpose is to minimize and obscure the crime rates of nonwhite "Latinos" while inflating those of European Americans.

In the case of sex offenders, as opposed to "Latino" criminals generally, virtually all those defined as "white" can be seen and identified as nonwhite just by visiting the sex offender registry and looking at mug-shots. But few people will do this. And, without mass protests and demands for racially honest designations, the statistics won't be rectified.

Thus, statistically, the most heinous crime in the history of Green Bay was committed by two "white men". And, collectively, whites are guilty of thousands of sex crimes and other felonies just in Wisconsin that were actually committed by nonwhite "Hispanics".

Just as importantly, such tricks also minimize the crime rates of blacks and the white/black crime difference, since a large minority of criminals with Spanish surnames would otherwise be accurately defined as black.

We live in a surreal society, where Tiger Woods is defined as "black" even though he's only 1/4 black and half Oriental, and mulattos like Barack Obama and Halle Berry [Pictures]are described as "black" and "African-American", but where mulattos and blacks with Spanish surnames are classified as "white" when they rape women and girls and commit murders and robberies and aggravated assaults.

Incidentally, the misrepresentations of the Wisconsin sex offender registry are not limited to defining blacks and browns with Spanish surnames as "white". The atrocity committed by Nieto and Morales involved kidnapping, gang-rape, torture, maiming, and attempted murder. But the registry says nothing about the abduction and burning and only describes the gang-rape in an abstract and disembodied legal sense: Criminal Code: 940225(2); Second-Degree Sexual Assault.

The reason: Nieto and Morales are only in the registry because of the gang-rape, not because of the kidnapping, torture, disfigurement, attempted murder etc.

If they had not raped their victim but "merely" abducted her, drove her into the country, beat her savagely, tortured her in a nonsexual manner, and then actually succeeded rather than failed in killing her by setting her on fire, their names and mug-shots would not be on any registry for uniquely vile and dangerous criminals.

If this middle-aged woman were convicted (she hasn't been, yet) of "multiple" or even one count of "second-degree sexual assault" for having consensual intercourse or "sexual contact" with a male inmate—who was almost surely the initiator in their sexual union—her name, mug-shot, and address will be on the internet, in Wisconsin's sex offender registry, until she passes from this world at age 79 or 86 or 92, just like Nieto and Morales. Lifetime registration and supervision are mandatory for all men and women convicted of "second-degree sexual assault."

And definitionally, according to the registry, she's guilty of the exact same crime, "second-degree sexual assault", as Nieto and Morales.

Perhaps her "victim" was Juan Nieto?

Simon Krejsa (email him) is a free-lance writer living in Wisconsin.