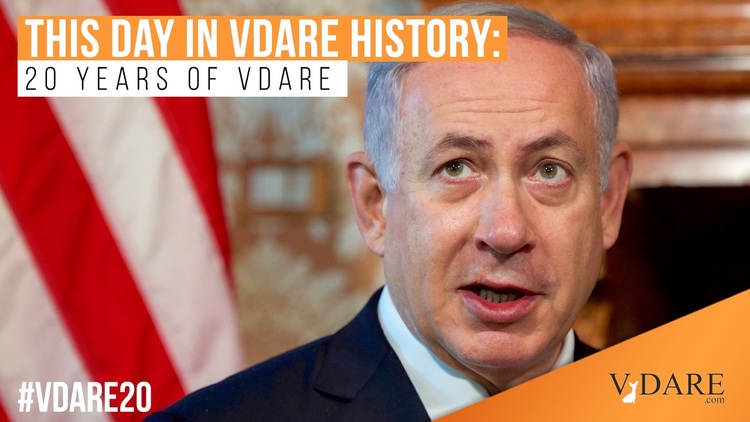 This Day In VDARE.com History, 2014: Netanyahu Acts To Protect Israelis From Treasonous High Court: GOP Should Do So For Americans!

Originally posted on VDARE.com on this day in 2014.

Organizer May Golan said that the residents are taking down the Israeli flag and flying the black flag in protest of the dictatorship of “bagatz” – the Hebrew acronym for the High Court for Justice…a week after the High Court controversially shot down the so-called "Infiltrator Law," which sought to tackle the problem of tens of thousands of illegal immigrants from Africa residing in Israel

I particularly sympathized with the opinion expressed by the bearded gentlemen at 1:04. He said that “Bagatz” is more dangerous to Israel than ISIS and Hamas because it was not letting the Government deal with the problem of illegal immigration and was destroying the country from inside.

Americans, after U.S. Federal Court interventions to destroy democratic attempts to protect communities by State and local ordinances—to say nothing of the catastrophic Plyler vs Doe decree—will applaud this response:

The High Court's decision was widely condemned by legislators, who saw it as an infringement on Israel's democratically-elected leadership by an unelected institution notorious for judicial activism in favor of "left-wing" causes.

Interior Minister Gideon Sa'ar noted that the decision marked the second time in a single year that the High Court intervened in legislation regarding infiltrators, which was approved by large majorities in two different Knessets. The previous Infiltrator Law was completely annulled by the High Court. Following this, a new law was passed, and now the court has effectively annulled it as well.

Judicial Imperialism and Kritarchy are not just American problems it seems.

But (unlike Americans) Israelis have statesmen willing to defend them. Prime Minister Netanyahu, fresh from stomping on an American questioner who dared query his policies, as I reported in Israel’s Netanyahu: “We Don’t Have To Open Our Doors To Be Swamped,” has drawn his sword:

Israeli Prime Minister Benjamin Netanyahu ordered ministers on Tuesday to draft new legislation to tackle illegal immigrants after the High Court overturned a law allowing their extended detention without trial…. "It is in the highest national interest to prevent the entry of new infiltrators to Israel and to encourage the departure of those who are in Israel and that is what we shall do," the statement quoted Netanyahu as telling Tuesday's meeting [Israel PM orders new legislation against illegal immigrants AFP Tuesday, October 7, 2014].

“We need to see the big picture,” he said. “Does Israel want to keep its character as a Jewish and democratic state? Does it want to protect its borders? Then we need to be clear on this matter.”

VDARE.com admires and has confidence in the Netanyahu Administration on this matter. We expect the situation I discussed in Only In Israel: Exodus Of Illegals Accelerates; Border Fence Working (Of Course) will continue and that Peter Brimelow was right to say Israel Shows Way On Illegals AND Judges.

But the question remains: U.S. Amnesties Illegals, Israel Deports. Why The Difference?