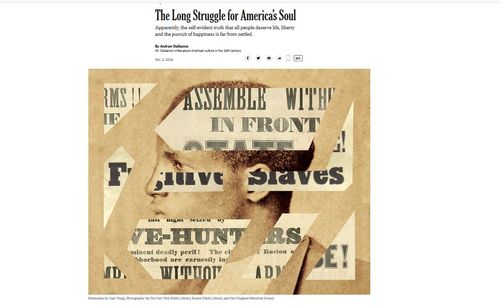 The Zeroth Amendment Explicated In The NEW YORK TIMES

The Long Struggle for America’s Soul

Apparently, the self-evident truth that all people deserve life, liberty and the pursuit of happiness is far from settled.

By Andrew Delbanco, Nov. 2, 2018
Andrew Delbanco is a professor of American studies at Columbia and the author, most recently, of “The War Before the War: Fugitive Slaves and the Struggle for America’s Soul From the Revolution to the Civil War,” from which this essay draws.

Like many Americans, I’ve been following events at our southern border — the separation of children from their parents; the president’s denigration of nonwhite migrants as criminals, rapists and animals; his bluster about denying birthright citizenship to their children; and his pledge to send federal troops to intercept a dwindling caravan of frantic refugees.

To my ears, it all sounds eerily familiar. This is not the first time America has been torn apart over how to respond to people of color desperate to escape inhuman conditions. Nor is it the first time a president has threatened to deploy federal troops to return them to the horrors from which they fled.

I’m thinking, of course, of African-Americans, who were regarded for much of American history not as human beings but as a species of animate property no different from cattle and sheep.

And then about a thousand words on how black slavery was bad.

… But the strongest “rhyme” between fugitive slaves in the 19th century and illegal immigrants today is their shared anguish — the “degenerating sense of nobodiness,” in the Rev. Dr. Martin Luther King Jr.’s devastating phrase — inflicted by a society that treats them as non-persons. People demeaned in this way forced Americans then, and force us now, to confront the central question of our history: Who is — or isn’t — recognized as fully human? Our Declaration of Independence was supposed to answer this question with the proposition that “all men are created equal” and “endowed by their creator with certain unalienable rights,” including “life, liberty, and the pursuit of happiness.”

The Preamble says the purpose of the Constitution is to do good thing for “ourselves and our posterity,” but who can remember 55 words?

At certain decisive moments in our history, attempts have been made to extend this principle beyond the cadre of the propertied white males who first articulated it. …

But if we’ve learned anything in the age of Trump, it’s that rights can also be constricted and rescinded. The self-evident truth that all people deserve life, liberty and the pursuit of happiness is a long way from settled in the American mind. The question of who is considered fully human has returned with a vengeance.

So, it’s dehumanizing to not let somebody move to America just because they are not an American citizen.