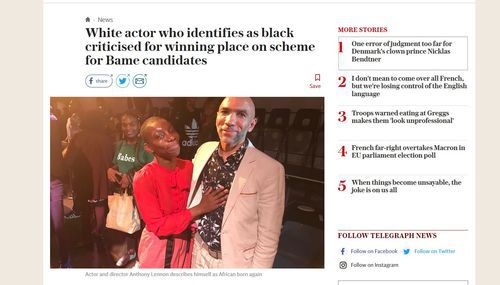 Transracial Irish Actor Gets Grant for Being Black

Britain long lagged America in affirmative schemes. My impression is that Prime Minister May has been pushing more quotas.

One thing the Brits might not understand is that affirmative action programs for blacks don’t descend into farcical questions of who is black very often in the U.S. because, contrary to everything you read in the papers, American whites have a high moral standard of not horning in on black privileges. American whites are much more likely to try to appropriate privileges reserved for American Indians (e.g., Senator Warren) than for African-Americans.

Will this prove true as well in Britain? I don’t know.

A white theatre director, who describes himself as an “African born again”, has come under fire, after securing public funding intended to help ethnic minorities develop their stage careers.

Anthony Lennon, 53, who was born in London and whose parents are Irish, won a place on a two year Arts Council funded scheme, after a leading black theatre company accepted his claim to be of “mixed heritage”.

He was one of four “theatre practitioners of colour”, to be awarded part of a £400,000 talent development grant.

But Mr Lennon has been accused of being a “racial imposter” after it emerged that despite changing his name to Taharka Ekundayo at one point, he is unquestionably white.

The company involved, Talawa, which is one of the country’s leading black theatre groups, last night defended its position, insisting Mr Lennon was an “exceptional” person for the role.

In a statement, a Talawa spokesman said: “As an artist of mixed heritage he is not only eligible for the position, but his experience, work and achievements make him an exceptional person for the role.”

But Trevor Phillips, the former chair of the Commission for Racial Equality, said allowing people to self-identify on matters of race, inevitably meant members of the black Asian and ethnic minority (Bame) community lost out.

Mr Lennon was born in Paddington, west London in 1965 to Irish parents who emigrated to Britain in the 1950s,

His father, Patrick, was born in Waterford, while his mother Josephine O’Brien was raised in Tralee.

He had two brothers and despite their White Irish heritage they all had dark complexions and curly hair.

Writing about his experiences as a child, in the racially tense London of the late 1960s, Mr Lennon claimed he was regularly subjected to misdirected racist abuse, and as a result began to identify with black culture.

The brother of Chicago mayor Rahm Emanuel claims that Rahm was subjected as a child to “misdirected racist abuse,” so I guess that makes it okay that Rahm has pushed for 30 years a policy of Population Transfers of Troublesome-Americans out of Chicago’s housing projects and to less vibrant places like Dubuque.

After launching his career as an actor, Mr Lennon said he struggled to get parts for white characters and had more success landing black roles.

In the book, Photo ID, he argued: “Everybody on the planet is African. It’s your choice as to whether you accept it.”

He has also talked about going through the “struggles of a black actor”.

There is no suggestion Mr Lennon tried to mislead anyone is applying for a place on the Arts Council funded two year Artistic Director Leadership Programme.