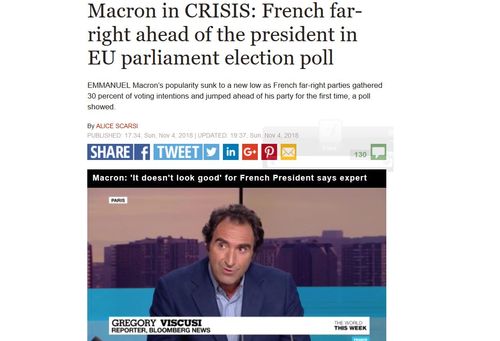 France, Next Stop For European Populism?

The defeat of Marine Le Pen and the National Front in the last French presidential election was supposed to be a deathblow to European popuism. Emmanuel Macron is an almost perfect representation of the European governing elite, with his disdain for French patriotism, cringy attempts to appeal to nonwhite immigrants, and desperate defenses of the neoliberal order. Yet far from saving the European Union project, Macron may be putting it in mortal peril. He is historically unpopular and the National Front (now rebranded under the name Rassemblement National) may soon have an opportunity for electoral gains.

French President Emmanuel Macron saw his efforts to breath fresh air into his five-year term with new cabinet, were in vain after three quarters of people still disapprove of his ruling way, a poll showed on Wednesday.

A Kantar Sofres-onepoint pollster found that only 26 percent of respondents still credit the 40-year-old top official to fix the country's economic and social problems, down by four percentage points compared to figures released earlier this month.

For the May-October period, Macron's popularity lost 15 points, it added.

Dogged by critics for having a vertical, monarchical way of governing and a reputation of arrogance, France's youngest top official in its modern history, suffered a setback, this month, after the three ministers' resignation that put into question his craftiness and unpopular economic and social reforms ignited public anger.

This is important because the elections for the European Parliament are drawing ever closer. The National Front is now leading the government in recent polls.

The results, released today, showed Marine Le Pen’s Rassemblement National (RN), formerly known as National Front, rose from 17 to 21 percent. Together with the seven percent gathered by sovereignist Nicolas Dupont-Aignan and one percent each for parties supporting a ‘Frexit’ led by former Ms Le Pen’s associates, Florian Philippot and Francois Asselineau, far-right parties got a combined 30 percent of voting intentions, five percent more than the 25 percent in August.

Of course, there's a pattern to these kinds of things. The "far right" polls well, and then in the lead-up to the election the Main Stream Media has a collective freak out and tries to scare people away from voting for common sense, nationalist solutions. Macron is using the same tactic as his media allies, recently rolling out a new ad attacking the governments of Hungary and Italy and basically trying to frighten people into supporting the status quo.

This has worked in the past in France, but it can't work forever. Italian Interior Minister Matteo Salvini is already predicting a "People's Spring" and the end of Macron.

“Macron and his friends must be very afraid… Because in 2019, the People’s Spring will sweep them aside,” Mr Salvini tweeted shortly after the French government published a campaign video warning voters against the likes of the Italian conservative and his Hungarian ally Viktor Orban.

“The French government has released – using taxpayers’ money – an official campaign video for the European elections in which they have depicted me as a bogeyman,” he continued.

The video clip, which was published on the French government’s official Twitter account on October 26, urges the French to vote for “unity” in the crunch May vote, and reject politics of “division”.

EU elites have nothing left but lame cliches. The nationalist revolution can't be postponed forever, even in France.