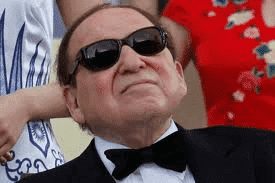 Many Patriotic Americans are puzzled by the systematic refusal of the GOP Establishment to heed their interests and its obstinate resistance to accepting the GOP's historically inevitable role as the Generic American Party.

A conclusive explanation appeared on Tuesday in The Daily Caller – and the words ‘Immigration’ or ‘Amnesty’ are never mentioned.

Is The GOP Going To Let Sheldon Adelson Buy An Online Gambling Ban? By Jerry Rogers 08/05/2014 is quite explicit-

Adelson has launched a high profile campaign to protect profits at his casinos from online competition. Adelson fears the competition from states legalizing online gaming, and he believes it is suicidal for casino interests not to seek a ban…So Adelson launched an astroturf coalition, hired lobbyists to write legislation, and dug deep into his political connections.

Correctly pointing out that a Federal ban on online gaming is a major invasion of State’s rights which Republicans generally protect, Rogers notes that Adelson’s dollars are pretty much sweeping the field:

...where are all the Republicans elected to Congress claiming to oppose cronyism and support states’ rights?

What of the Republican Study  Committee, the supposed conscience of House Republicans? Silent. The libertarian-leaning Liberty Caucus, chaired by Rep. Justin Amash? Silent. And the Tenth Amendment Caucus whose ostensible mission is to protect states’ rights? Also silent.

Casino Billionaire Sheldon Adelson’s crudely selfish drive to ban online gambling is functioning as a kind of political barium meal test – vividly revealing the cancerous way how his money (and that of those like him) is metastasizing into a lethal threat to American political health.

Adelson is financially interested in the gambling question, but he is also a social leftist as Harry Reid recently acknowledged. And it is extremely probable that his ethnic animosities and prejudices are driving his Amnesty/Immigration Surge enthusiasm, as it has for many others before him. He is not alone.

This massive corruption involved can be named where gambling is concerned, but with a brief exception the respectable Immigration restraint outfits apparently lack the nerve to publicize the absolutely central role it has played in the 2013/14 Amnesty/Immigration Campaign.