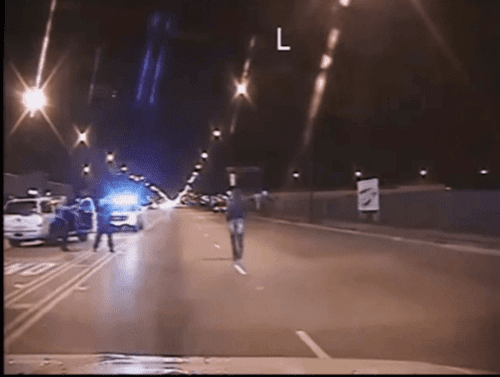 That Laquan McDonald Shooting In Chicago: A Counter-Take

Here (with a hat tip to Countenance Blog) is an interesting counter-take on the 2014 Chicago shooting of Laquan McDonald.

I expect every police officer in the country has been taught a defensive doctrine called the Tueller Drill. The Tueller Drill was developed by Salt Lake City Police Officer Dennis Tueller, who among other things was a firearms instructor for his department.

That begged the question, then, of what distance became the threshold at which an impact-weapon armed attacker did constitute an imminent threat of death or grave bodily harm such that the officer would be justified in using deadly force. Was that distance 5 feet? 10 feet? 15 feet?

After running a great many empirical tests, Dennis found that the distance that an impact-weapon armed attacker could cross from a standing start in 1.5 seconds was not just 5 feet, or 10 feet, or 15 feet. Rather, such an aggressor could consistently cross a distance of 21 feet, a full 7 yards, in the 1.5 seconds it would take the typical officer to draw his [weapon from his]  holster and engage that aggressor with aimed fire.

Here's a police training video displaying two officers testing this in the gym.

Branca also has a video he describes as

And in case that exercise wasn’t sufficiently convincing on how effective a knife can be against even a prepared and well-armed police officer, here’s a video of an actual confrontation between an aggressive and motivated knife-wielding attacker and several armed police officers, some of whom were armed with long guns. (CAUTION: Not all of these officers survive the encounter, and there’s plenty of blood, so if you’re sensitive to such things you may wish to defer viewing.)

You can watch it here.