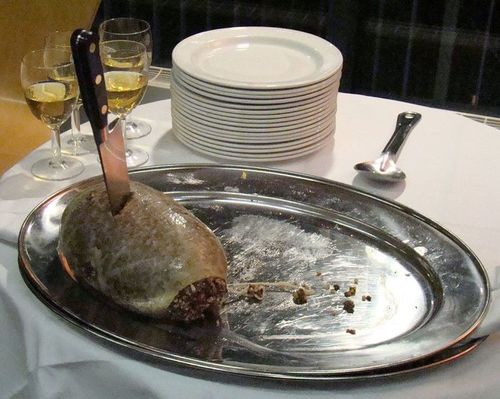 Radio Derb Is On The Air: Haggis On Burns Night, Etc.

Radio Derb is on the the air—sample quote:

Thanksgiving, Christmas, New Year … the festive season comes upon us. With one eye on the news, let's take a glance at the other end of the season: at Burns Night, January 25th, when we honor Robert Burns, the national poet of Scotland.

As every caledonophile knows, on Burns Night you eat a dish of haggis with neaps and tatties, washed down with a dram or two of a good single malt. OK: neaps are turnips and tatties are potatoes; but what is haggis?

When I was a child in England, one of my uncles told me that haggis was a variety of goat that lived in the mountains of Scotland. The legs on one side of the goat were longer than the legs on the other side, he told me, so that the haggis could stand on the steep mountain slopes without falling over.

I went on believing that well into my adolescence. It is not true. Haggis is a comestible, something like a small American football in appearance. The outer part is the membrane of a sheep's stomach; inside is a mix of chopped-up sheep's heart, liver, and lungs, mixed with oatmeal and onions and made savory with pepper and other spices. Trust me, it's delicious. If you haven't tried it, you really should.

Haggis has always been available in the U.S.A. I've been getting mine from a firm in New Jersey. However, American haggis leaves out the sheep's lung, which has been prohibited under federal food rules since 1971. Because of those pettifogging rules, Scottish firms haven't been able to export haggis to the U.S.A. This has had a serious negative effect on Scotland's economy.

No more! Scotland's rural affairs secretary, Richard Locchead, has been over here with a delegation trying to get the ban lifted. After long and arduous negotiation, it seems they may succeed, with some slight adjustments to the recipe.

I think our own producers here in Scotland are up for tweaking the recipe so that U.S. customers can still get as close as possible to the real thing. And if we managed to get into that market that would create jobs back here in Scotland and millions of pounds to the Scottish economy.

There's an economics lesson there, something to do with comparative advantage, but I haven't thought it through.

Whatever; save some of your festive spirit for January 25th and a good haggis dinner!

Get the whole thing here. [MP3]