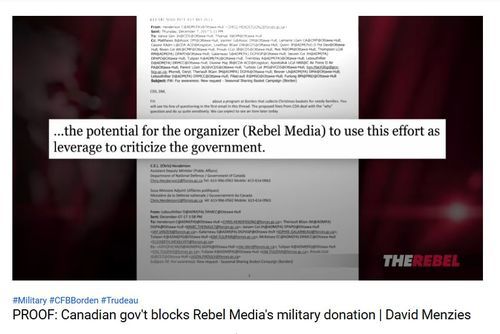 This story from Canada's The Rebel Media reminds me of our own troubles with trying to get a conference going--hotels are willing break contracts despite penalty clauses.

What The Rebel Media was trying to do was give $15,000 dollars to a Canadian soldiers charity.What you need to know is that Rebel Media, owned by Ezra Levant, is farther right than most of the official Conservative Party, and Canadian conservative media outlets like the National Post, but still cuckservative by our standards.

But cucking doesn't help. You will still be hated.

Viewers may recall that around this time last year, we started a fund-raising drive for soldiers and their families at Camp Borden north of Toronto after being tipped off about a story in the Borden Citizen entitled “Seasonal Sharing Basket Campaign.”

Initially we thought soldiers and their families after already giving so much, were now giving to Christmas hampers for families in need, but no.

The fundraising initiative wasn’t to help strangers at the homeless shelter, but rather, for CFB soldiers who are so poor they can’t afford to feed their own families.

Justin Trudeau, the same man who gave $10.5M to convicted terrorist Omar Khadr, pays our soldiers so little that they’re forced to ask for... charity?

That’s when The Rebel Media, with the help of generous viewers, set out to raise $10,000 for the CFB Borden food hamper, and as always you came through, donating MORE than $15,000!

But a funny thing happened on the way to CFB Borden. What was meant to be a feel-good photo-op of the cheque delivery, turned into the opposite when the money was rejected.

We had no intention of keeping your generous donations, so we sought out another military charity and found an excellent charity called Canada Company.

They accepted our donation and then on the way back to Rebel HQ, it seems Canada Company inexplicably suffered some form of buyer’s remorse. They too rejected our cheque and also asked that we destroy the videotaped cheque presentation![More]

Rebel filed a Freedom of Information request, and found a hundred pages of Canadian defense bureaucrats afraid to be associated with someone as evil as Ezra's Rebel Media, which might use a soldier's charity to criticize the Canadian Government.

By the way, the Canadian government not only doesn't pay its soldiers enough at Christmas, it refused, in both official languages, to call it Christmas: their campaign for what I think of as "Christmas hampers" is labeled "Seasonal Sharing Basket Campaign | Campagne des paniers-partage du temps". And it's decorated with a picture of Christmas Tree.