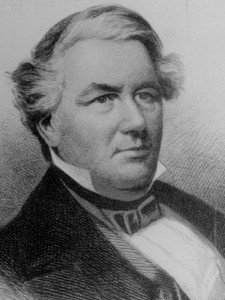 The topic here is Millard Fillmore, the 13th President of these United States. President Fillmore does not have a big fan club, except in Buffalo, New York, where he practiced law and is regarded as a hometown hero. Buffalo has various places and institutions named after Fillmore, and there is a statue of him outside City Hall.

Fillmore was President in the early 1850s — an accidental President, taking over when Zachary Taylor died from eating too many strawberries at a July 4th party.

The great issue of the day — this was the decade before the Civil War, remember — was the expansion of slavery. The United States was growing, acquiring new territories. Should slavery be allowed in these territories, or not? In some of them? Which ones? Who should decide?

The controversy was damped down some, although not definitively settled, by a package of bills collectively known as the 1850 Compromise, which Millard Fillmore signed. One of those bills was the Fugitive Slave Act, giving slave owners the right to recover slaves who'd escaped to a free state or territory.

That, today, 165 years later, has gotten President Fillmore into trouble with the NAACP. The Buffalo branch has asked elected officials to deny any future requests to attach Fillmore's name to anything [NAACP: Stop naming things after Millard Fillmore, by Carolyn Thompson, Associated Press, February 12, 2015].

Someone should tell them to go pound sand, although I doubt anyone has the guts to do so. My impression is that Fillmore did his lawyerly best with the Compromise, but the disagreements he was trying to resolve were fundamentally intractable, as the outbreak of war eleven years later proved.

Anyway, he was President under the Constitution as it stood. I can't see any reason he shouldn't be honored like other Presidents, and I would dearly like to see someone, sometime stand up to these self-righteous busybodies.