#DanishLivesMatter — Danish Men Killed, others wounded in attack on cartoonist in Copenhagen 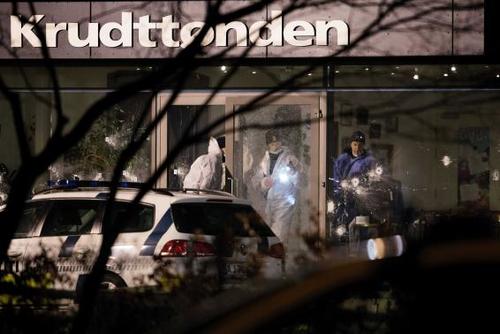 It's getting to be a weekly event.

A civilian was killed and three police wounded on Saturday when a masked gunman sprayed bullets into a Copenhagen meeting attended by a Swedish artist threatened with death for his cartoons of the Prophet Mohammad [One dead in shooting at Danish meeting with artist who drew Mohammad, by Sabina Zawadski and Ole Mikkelsen, Reuters, February 14, 2015]

Presumably payback from that widespread Danish and Swedish colonization of the Arab world.

"We feel certain now that it was a politically motivated attack, and thereby it was a terrorist attack," [Danish Prime Minsiter] Thorning-Schmidt told journalists close to the site of the attack.

Thorning-Schmidt is best known to Americans as one of the many objects of hatred for Michelle Obama, after our President spent Nelson Mandela's inadvertently hilarious funeral canoodling with her.  [Funeral Spice, by Mark Steyn, National Review, December 13, 2013]  But as a Social Democrat in Denmark, importing more voters, er, immigrants was key to her campaign.  Only a few days ago, Main Stream Media outlets gushed immigration to Denmark was at an all time high, especially because of the migration of Syrians.  [Immigration in Denmark at all time high, The Local, February 10, 2015]

There was also a second shooting at a synagogue.  [Injuries in second Copenhagen shooting, BBC, February 14, 2015]  Several were injured.  In both cases, as of this writing, the killer is still at large.

Thanks to mass immigration, even the most objectively successful societies in the world now get to enjoy tribal warfare in their streets and assassination attempts because of Third World taboos.  Francis Fukuyama used "Getting to Denmark" as his metaphor for how societies progress to the highest stage in human development.  Because of the Western elite's insistence on importing a new underclass, it's taking on a whole new meaning.