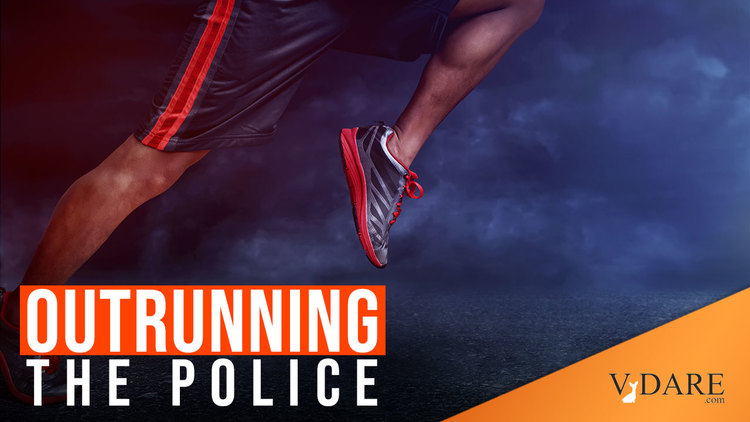 One correlation I’ve long remarked upon is between sprinting speed and criminality. Back in 1982 I was entering the Century Mall in Chicago when a black youth holding a stolen item dashed by, closely pursued by two Mexican security guards. As they raced north on Clark Street, the black kid’s superior speed put distance between him and a trip to the police station.

On the other hand, 19-year-old Antoine Watson probably wouldn’t have murdered the 84-year-old Thai guy in San Francisco if he didn’t generate so much velocity as he sprinted like an NFL cornerback blitzing from the blind side to knock the old man down.

A slower hate criminal probably wouldn’t have built up enough force to kill the old man.

Sprinting ability is obviously somewhat race related, with the last 72 finalists in the Olympic 100 meter men’s dash, going back through 1984, being at least half-SubSaharan.

In turn, sprinting ability makes doing crimes more rational when you are a teen.

By the way, speaking of black-on-Asian violence, I did the math on the National Criminal Victimization Survey for Takimag in October:

In 2018’s Table 14, the BJS broke out the black vs. Asian offending rates. According to inadequate sample sizes, blacks aggressed against Asians 50,000 times vs. a little over 500 times that Asians attacked blacks, for an 89 to 1 racial ratio of total incidents. Because there are almost twice as many blacks as Asians, on a per capita footing that would be 46 to 1.

In 2019, the feds dealt with their problem of black vs. Asian statistics by no longer breaking out Asians in their Table 15 of offender vs. victim counts.