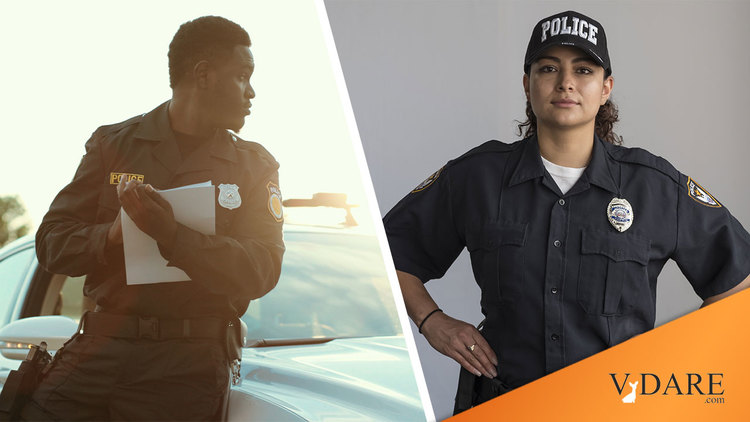 The central hurdle in evaluating whether officers from different groups treat civilians differently has been accounting for context. Without the ability to compare officers facing common circumstances, any differences in their behavior become ambiguous. 2/

For a half century or so, police departments have assigned more black cops to black neighborhoods.

In other words, Professor Mummolo (an Italian-American with a conveniently African-sounding surname) has proven that black, Hispanic, and female cops work less hard for their salaries than do white cops [The role of officer race and gender in police-civilian interactions in Chicago, Science, February 12, 2021].

This is not, of course, because Detroit is a utopia of nonviolence, but because the Detroit cops don’t bother much anymore. From Wikipedia:

Year 2013 breakdown of gender and ethnic minorities in the Detroit PD.:

The Detroit Police Department has one of the largest percentages of black officers of any major city police department, reflecting current overall city demographics. Lawsuits alleging discrimination stemming from the influence of affirmative action and allegations of race-based promotional bias for executive positions have surfaced repeatedly. As of 2008, the majority of upper command members in the Detroit PD were black.

In defense of the Detroit PD, however, murders didn’t get all that much worse during 2020’s Racial Reckoning. Detroit’s murders only went up 20% in 2020 over 2019, versus 38% in urban America in general. Detroit’s white mayor and black police took a harder line against the Mostly Peaceful Protests than most local authorities dared.