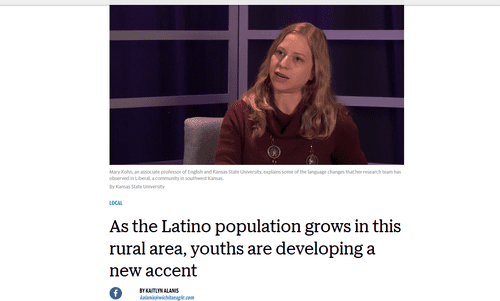 In recent decades, Spanish-speaking immigrants have flooded into southwest Kansas. The city of Liberal, Kansas is now majority Hispanic, and so is the famous Old West Cowtown Dodge City, Kansas .

In fact, there are so many Spanish-speakers in Southwest Kansas that it’s influenced the way younger English-speaking Kansans speak English.

Residents in southwest Kansas are starting to speak with a distinct, new accent as the Latino population continues to grow — and the accent is most prominent among young people. A research team at Kansas State University has found that as demographics change in the region, the way people speak English also changes.
As the Latino population grows in this rural area, youths are developing a new accent, by Kaitlyn Alanis, Kansas.com, June 13, 2018

So what they’re talking about is not English speakers learning Spanish, but the way younger English-speakers are speaking English. They’ve been influenced by the Spanish language sound system.

The team is calling this new way of speaking a "Liberal accent" or "Liberal sound." Liberal is a Seward County, Kansas, town of about 25,000 people. About 59 percent of the town's population was Hispanic or Latino in 2010, according to the U.S. Census. Just a couple of decades ago, Liberal's population was about 20 percent Latino, the K-State news release says.

What we’re talking about is rapid demographic change.

The sound change, which lead researcher Mary Kohn calls a "Latino-English" sound, is more prominent in youths — including those who do not speak Spanish. “It dispels the myth of the idea that Kansas is a monolingual state,” Kohn, a linguist, told KMUW. “That’s never been the case."

Kohn told K-State that the patterns she has noticed are on a phonetic level. That means it deals with sounds. "So what we are dealing with here is a distinct accent," she said. "It's not so much that we have completely radical new ways of speaking in Liberal, as it is there is a distinctive Liberal sound that is emerging."

Every language has its own sound system, which we acquire as children. These young English-speakers heard so much Spanish that, even though they didn’t learn Spanish, they picked up part of the sound system.

In a video, Kohn said there is a distinction in the pronunciation of "aaa" or "nnn" sounds. As an example, in varieties of English, there's a distinction between the "aaa" sound in "hat" and "hand," Kohn said. The sound change happens as speakers raise their tongue. But in Liberal and other southwest Kansas communities where the accent is developing, Kohn said the sound doesn't have a distinction in words like "hat" and hand." That's because the mouth is still in an open-jaw position, she said. Both the vowels and rhythm are similar to a Spanish style, KMUW reported.

Here's  a video of Dr. Kohn talking about this.

The research is part of K-State's Kansas Speaks Project, which is documenting language change throughout the state. The team is focusing on southwest Kansas because of rapidly-changing demographics, the release states.

A K-State 2018 graduate, Trevin Garcia from Liberal, helped conduct interviews with people in the community and analyzed the results with other students. The team has interviewed more than 90 people from 8 to 91 years old in several Kansas communities. The team's findings were then compared with about 20 archived interviews from 1968.

"For us, it's just really exciting to watch these demographic shifts happening," Kohn said in the release. "There are changes to the demography of the region and there are linguistic changes as well. It's a real testing ground of what happens when you bring different language backgrounds together within a community in an immediate and present way."

I get the impression that Dr. Kohn is not just recording a linguistic phenomenon, but is also making a sort of political point.

She [Dr. Kohn] said the patterns happening in Liberal are also happening in other U.S. regions, including rural communities in Texas, California, New York and Florida. Latino populations are rapidly growing in those areas as well, according to K-State. It's also similar to how the Minnesota accent developed through "northern European immigration to the region."

"It's something that we see all over the U.S., and it's characteristic of what happens when you have large immigration patterns affect the demographic of the region," Kohn said.