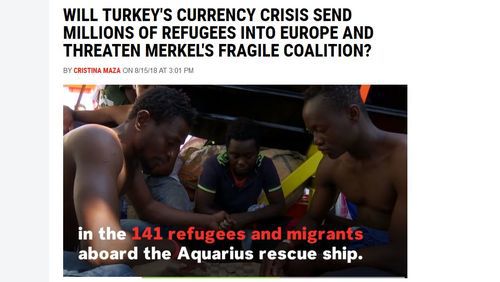 [See Also: Roll Over Thucydides--"Failure Migration" Means The Weak Do What They Can, The Strong Suffer What They Must by James Kirkpatrick]

Turkish president Tayyip Erdoğan's regime is under siege after President Donald Trump took strong economic action to protest the detainment of an American evangelical pastor [US threatens more sanctions on Turkey over detained pastor, Al Jazeera, August 17, 2018]. Obviously, this isn't the only thing that's affecting the Turkish economy. But President Trump's actions could be the proverbial straw that breaks the camel's back.

For years the Turkish economy has been on a downward spiral, due to burgeoning international debt and Turkish President Recep Tayyip Erdoğan’s policy of keeping interest rates artificially low. In the last several weeks, a dispute between Erdoğan and President Donald Trump has accelerated a drop in the value of the Turkish lira, which fell to a record low on Monday of 7.24 to the dollar. (A year ago, a dollar could buy three and a half lira; two years ago, three.) By the end of the day Wednesday the value had rebounded slightly, but investors, business leaders, and Turkish government officials still feared that the economy might crash.

However, Turkey has a powerful biological weapon. Three-and-a-half million "refugees," ostensibly from Syria, are currently residing in Turkey, and the wily Erdogan could simply release them into Europe in order to put pressure on Western nations. European leaders can't admit this and occasionally pretend immigration is a "strength" for Europe, but they know it mass immigration would cost them dearly. They are are acting accordingly. Thus, Turkey may come out of this having received aid from the EU in order to stave off a wave of failure migration [Will Turkey's currency crisis send millions of refugees into Europe and threaten Merkel's fragile coalition, by Cristina Mazs, Newsweek, August 15, 2018]

Speaking by phone to the Turkish leader on Wednesday, Mrs Merkel agreed on a meeting between both countries’ finance minister over the following days...

The German Chancellor has also doubled down by offering a possible state visit of Mr Erdogan in Germany on September 28.

Despite Berlin not yet offering any financial aid, its support alone could still help the Lira to recovery from the record nosedive experienced in the past two weeks.

Mrs Merkel said earlier this week: “No one has an interest in the economic destabilisation of Turkey.”

According to a person familiar with Mrs Merkel’s thinking who asked not to be named, Germany can’t allow Turkey to descend into chaos, Bloomberg reported.

One of the main reasons of this new opening to Turkey can be found in Berlin’s fear a collapse of Ankara would raise the number of refugees arrivals in Europe, Bloomberg experts added.

This whole episode of the situation facing the Western world as a whole. We are held hostage by the weakness and incompetence of foreigners. The worse they perform, the more burdens are imposed on us, because God knows they aren't responsible for their own societal failures. And until the West summons the will to say no, this will continue until the West is utterly extinguished at the end of this long process of degeneration.