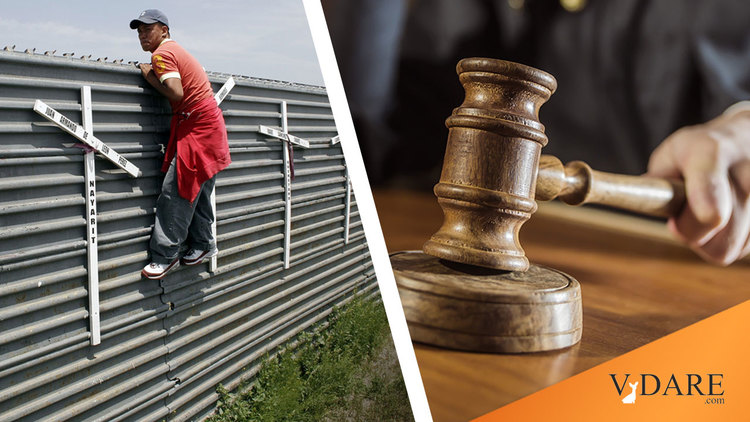 SF CHRONICLE Sob Story: Aliens Who Won’t Even Bother To Show Up For Hearing Ordered Deported

The left's continuing war on immigration enforcement goes on.

Now they are trying to stop illegal aliens from being ordered deported when the aliens don't even show up for their court dates.

Unlike the right, the Democrats are very good at staying on the offensive. There's a saying in boxing about throwing "punches in bunches." If you keep your opponent on the defensive by throwing multiple combinations of punches, eventually, one knockout blow will likely get through. The Democrats have used that in everything from the January 6th protests to the Trump Russian collusion hoax. The point isn't whether their accusations are valid, it's that it keeps the Republicans on the defensive answering questions and accusations over and over again.

When it comes to immigration, Jen Psaki and company tried the same distraction tactic by accusing Border Patrol agents on the horse patrol of whipping illegal aliens. By doing so, they hoped to elevate the Haitian insurgents to the level of victim, the Holy Grail status of any Leftist.

More recently, I was forwarded an article from the San Francisco Chronicle about illegal aliens being ordered deported in absentia. If you look at the picture in the article, it has the picture of the back of a presumably illegal alien as he sits on a bunk bed, with a caption that reads:

H.C. says he came to the United States in 2017 to escape threats he received from violent gangs in his native Guatemala. He is trying to remain in the Bay Area, where he has family. But he risks being ordered deported if he misses an immigration court date, even if a hearing notice is mailed to the wrong address, which has become a problem for more than a hundred immigrants in San Francisco Immigration Court this year.

A San Francisco immigration judge took less than an hour on Tuesday to order 23 people deported.

But none of the immigrants was present and it’s unclear whether they knew about the hearing — even as they were ordered deported for missing it.https://t.co/Z4YNQ43Ssy

Right away, the Chronicle is going with the individual sob story. "H.C. is a victim, we should all feel sorry for him and let him stay on our Magic Dirt."

Now, I've seen many illegal aliens ordered deported in absentia. If the alien is being given a Notice to Appear, it is often harped on them to give a workable address in order to contact them. It's the alien's responsibility to give a valid address where they can be contacted. (Legal immigrants have to keep the immigration authorities informed of their address—tourists have to give the name of their hotel.)

It doesn't have to be their address, it could be the address of a friend or family member who will forward them the letter. Of course, many illegal aliens give fake addresses intentionally. They have no intention of showing up to court in the first place. It used to be fairly routine for Immigration Judges to order an illegal alien deported "in absentia" for not showing up to court.

One of the theories of criminal justice is that the judges must be very clear on the rules. That way, different judges cannot make up different laws as a way of doing business. In this interview by reporter Deepa Fernandes (who herself sounds like an immigrant from Australia—but was born in Bombay), she tells how one Immigration Judge ordered 23 people deported in under an hour because they didn't show up for their immigration hearing [Listen: San Francisco's deportation 'conveyor belt,' Fifth & Mission Podcast, SF Chronicle, November 2, 2021]. She then goes to another court next door where the judge bends over backwards doing the job of a defense attorney by trying to call phone numbers and otherwise get in touch with the "defendants" (really a bunch of illegal alien scammers). This second judge very reluctantly orders one illegal alien deported in absentia but makes sure to put notes in the file reminding the illegal alien that they can appeal this decision.

I can remember earlier when illegal aliens ordered deported in absentia didn't get to see the inside of an immigration court ever. It was "Do not pass go, do not collect $200," you are being deported and there's nothing you can do about it. However, towards the end of my career, we were hearing about more people being ordered deported who were suddenly back out on the street.

Below is a link to a  judge by judge report on various Immigration Judges' report cards. Immigration attorneys use this to shop for different jurisdictions and different judges.

In the San Francisco Chronicle article, Ila Deiss is the immigration judge who was going out of her way to help the illegal aliens. Not surprisingly, for asylum claims, she has a 85.4% approval rating. She only disapproves of 14.6% of cases and one suspects that a lot of those are deportations in absentia, when she was not able to get in touch with the illegal alien. In fact, reporter Deepa Fernandes tells of how disappointed Ila Deiss was when having to order one single alien deported in absentia.

With an immigration system this broken and well over a million illegal aliens crossing into the United States this year alone, it's simply impossible to have an orderly hearing for each one of them. The Left knows this and rejoices in their destruction of the system.