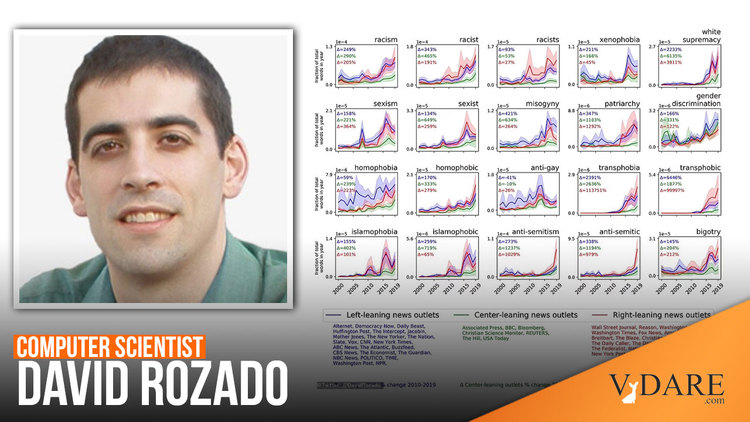 How a change in media business model sparked the Great Awokening:

By MICHELLE THOMPSON FOR DAILYMAIL.COM

Liberal mainstream media outlets have stoked ‘moral panic’ with references to racism, white supremacy and homophobia skyrocketing after 2011 when the New York Times implemented a paywall and rewarded its white liberal readers’ enthusiasm for wokeness …

The growth in divisive language was uncovered in an academic study led by New Zealand computer scientist David Rozado.

In ‘Prevalence of Prejudice-Denoting Words in News Media Discourse: A Chronological Analysis‘, it also found that the frequency of the term ‘white supremacy’ grew by 2,862 from 2010 to 2019 in overall media coverage.

The study said that ‘agenda setting’ among media outlets can happen when ‘certain core outlets drive the conversation for most other media,’ dictating the topics that yield the most attention.

Former President Donald Trump has been widely blamed for stoking division in the run to his bid for president and during his time in the White House, but this research shows that language ‘denoting racism, [and] homophobia’ reached new highs in 2014 – long before Trump entered the political arena. …

A New York Times spokesperson noted that the study does not include ‘critical information about the context in which the terms are being used.’

‘The New York Times reports on the most important stories of our era with rigor, fairness and accuracy,’ Jordan Cohen told DailyMail.com. ‘That includes a broad array of daily coverage that helps our readers understand this moment.’

Of course, we at the New York Times decide for much of the rest of the media what “the moment” is, and what news is not fit to print.

… Published in July, the study by New Zealand computer scientist David Rozado, reached its findings after analyzing 27 million news and opinion articles published between 1970 and 2019 in 47 of the nation’s most popular news media outlets.

Research found that the usage of certain words related to race, gender, and sexual and religious orientation skyrocketed between 2010 and 2019 across most new outlets, regardless of political leaning.

Of course, I was reporting on the work of Rozado and the comparable work of Zach Goldberg over two years ago. In fact, my 2018 article “The Emmett Till Effect” may have pioneered the study of the Great Awokening via tracking annual word counts in the New York Times.