Second Amendment Supporters Gather For PEACEFUL Virginia Rally, And Laura Ingraham Is There

It was nice to see a good sized crowd at the Second Amendment rally in Richmond, Virginia, on Monday. The mainstream media had shrieked up a storm about white gun-crazed Americans being a threat to public safety in the commonwealth or something — but predictably, the event was totally peaceful and diverse in a 2A way. 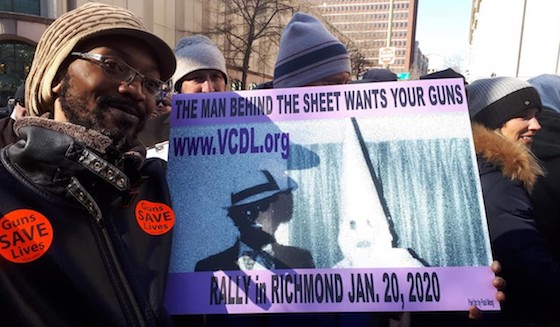 It’s amazing how little political leaders know about the people over whom they preside. Or maybe elites just pretend to be ignoramuses so they can display their power and perhaps stir up some trouble in the process.

Clearly, armed Americans defend their own or someone else’s safety all the time. Monday’s Washington Times had a front page photo of Stephen Willeford, who used his firearm to chase off a shooter from a Texas church in 2017. 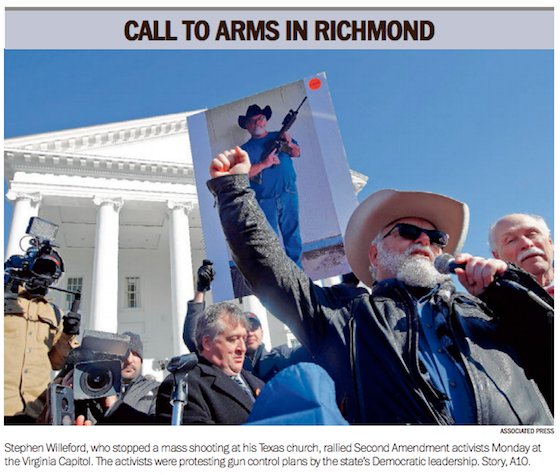 Here’s Laura Ingraham chatting with an agreeable Virginia sheriff about the event and issue:

LAURA INGRAHAM: Today thousands of law-abiding gun owners rallied at Virginia’s capital to oppose the gun-grabbing policies of Democrats in the state house. The media did their job, and best job, to smear those at the rally as gun toting racists. So we sent Fox’s own Griff Jenkins to Richmond to give you the real story.

UNIDENTIFIED MALE:  None of us out here want to cause violence at all. We all just want peace. But I would love to have the ability to protect myself, my family, and everyone else around me.

UNIDENTIFIED MALE:  And I heard a lot about violence. There’s really no violence happening out here.

UNIDENTIFIED MALE:  They want to have universal background checks, which we know is a first step toward gun registration, which we don’t need. Target criminals and violations of law-abiding criminals whether it’s weapons or other things, don’t target the law-abiding citizens.

UNIDENTIFIED MALE:  It all starts with the Second Amendment. Once they take that from you than it’s one right after another.

UNIDENTIFIED MALE:  The rest of Virginia if you look at the Second Amendment sanctuary city movement and counties, we don’t want gun control. We’re not going to comply with your gun control.

UNIDENTIFIED MALE:  You would have a better chance of laying in the creek and kissing a copperhead than you would getting the firearms from Virginians.

INGRAHAM:  I want to hang out with all those people; they look really fun. Joining me now is someone who was at that rally, Richard Vaughan, sheriff of Grayson County Virginia.

Sheriff, we really appreciate your being with us tonight. I know it wasn’t easy, so thanks so much. What is going to happen in your county if the bills that the Virginia Democrats are pushing go into effect?

SHERIFF RICHARD VAUGHAN:  Grayson County is a Second Amendment sanctuary, and if these bills are passed as proposed, I know they can still make some changes on this bill. But if they are passed as proposed, they will not be enforced in Grayson County because they are unconstitutional. We took an oath to uphold the Constitution of the United States and the Constitution of Virginia, and that’s what we’re going to do. We are not going to arrest law-abiding citizens for having guns.

INGRAHAM:  I pressed one of the State Democrat gun control advocates who serves now in the statehouse last week; he insisted, sheriff, that guns that are in possession of people now would be grandfathered in, and they wouldn’t be forced to be turned over, you wouldn’t have to turn your guns over. But that is not what I understand. There is a lot of loosey-goosey language in this legislation that would mean you become a felon if you own a particular type of semi-automatic weapon that has a big enough magazine in it, 10, more than 10, you are in big trouble.

INGRAHAM:  Sheriff, we sent our Griff Jenkins down there, and he was all through the crowd today. These are people from all parts of the state, they were men, women, ethnically diverse, racially diverse, people who, most of them were carrying their weapons because they were outside the perimeter, but Northam didn’t allow anyone to go on the property near the capital with their firearm. And also, you can see the crowd is much more representative in the overhead shot there.

And then they didn’t allow drones. I didn’t understand that. The FAA said no drones could be flown overhead either, I guess to take pictures? I don’t even understand that. It seems like they are curtailing everybody’s rights going into this rally, almost hoping to tick people off to spark some kind of unrest, but that never happened.

VAUGHAN:  Absolutely. It definitely was not a state of emergency. I spent several hours in the crowd in uniform with two of my deputies and some of my constituents. We met some of the best people in the country. We ate breakfast this morning with a gentleman from Houston who drove 19 hours just to be here in Virginia to help us protect our Second Amendment rights. We met people from Florida, Pennsylvania, militia groups, people carrying Armalite rifles, everybody there was armed. And they estimated nearly 60,000 people, yet there wasn’t a single person even arrested.

INGRAHAM:  Sheriff, compare that to the Antifa rallies, what happens at those things, right? You’ve got people with clubs, and cement they’re throwing at people, and trash everywhere, and assaulting people, and the media does a big collective yawn. You guys show up, a huge rally for the Second Amendment, no problems, no trash, no assaults, and you get the sense the media is unhappy that this happened. They are unhappy it didn’t play up to their stereotype.

Sheriff, we are with you all the way. Stay safe out there. Thank you for what you do for the Commonwealth of Virginia, and for the cause of the Second Amendment. Thank you, sir.