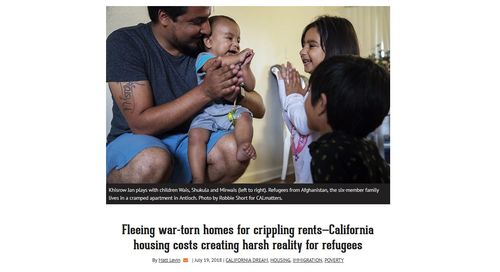 Refugees in Pricey California Struggle to Make the Rent

Life is harder for unskilled refugees who are resettled by do-gooders with no sense about the cost of living. One telling example is the struggle of Afghan families who have been placed in California’s ultra expensive Bay Area. That situation was reflected in a front-page sob story in the San Jose Mercury News on Monday: 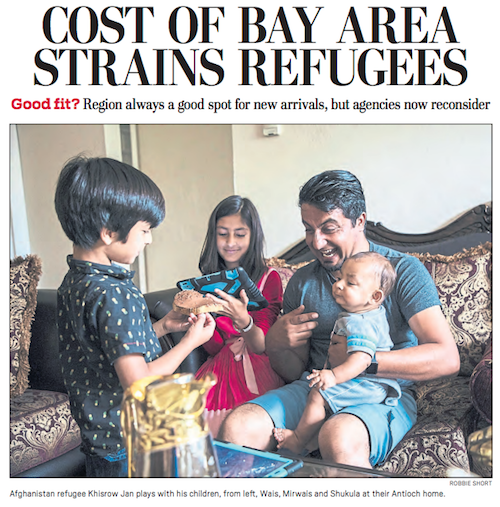 The subject family is not surviving financially. Khisrow Jan, the father and breadwinner, is working 12 hours a day as an Uber driver which doesn’t pay the rent of $1850 for a two-bedroom apartment in Antioch. He has a stay-at-home wife and four kids to support, so the expenses won’t be decreasing any time soon. The agency that placed the family in one of America’s most expensive areas did them no favors.

But the story does provide the dose of emotional diversity that many media outlets crave. It is a reprint from CalMatters.org, a liberal news site.

While Jan gets ready for work—driving an Uber in San Francisco for the next 12 hours — his 4-year-old daughter Shukula barricades the front door of their two-bedroom apartment in Antioch, a far-flung Bay Area suburb east of Oakland.

“I need to work. Need to make some money,” Jan, 34, playfully tells his daughter.

“No, you cannot,” replies Shukula, an impish smile spreading across her face.

That satisfies Shukula. She and the rest of Jan’s family—9-year-old Sameera, 5-year old Mirwais, and 9-month-old Wais, carried by his mother—follow Jan out to his car. He’ll be back at 2 or 3 a.m., long after his kids have fallen asleep.

When Jan and his family fled Afghanistan in 2015, he knew adjusting to a new life in California wasn’t going to be easy. His wife speaks very little English, and even after working as an interpreter with U.S. troops, his job prospects were limited.

But he never dreamed California was going to be this expensive.

The state’s skyrocketing housing costs have created a harsh new reality for refugees on the ground, many of whom are going to extraordinary lengths just to afford rent. The cost of living has increased so much in recent years that refugee resettlement agencies working in California are rethinking their strategies for relocating clients—and whether the state is a good fit for some refugees in the first place.

“I heard a lot about California out there in Afghanistan,” says Jan, who embedded with American soldiers from the Bay Area and other parts of the state. “They were saying California is nice. But trust me, I didn’t know anything about the rent and all these bills.”

California has long been a landing spot for refugees like Jan. Waves of Vietnamese, Iranian, Central American and other immigrants have resettled here over the past few decades, escaping persecution and turmoil in their home countries. More than 700,000 refugees have come to California since the mid 1970’s, including more than 30,000 in the last five years, according to state statistics.

Post
Conquest's First Law And RBG: "Everyone Is Conservative About What He Knows Best"
MORE...
POPULAR TAGS