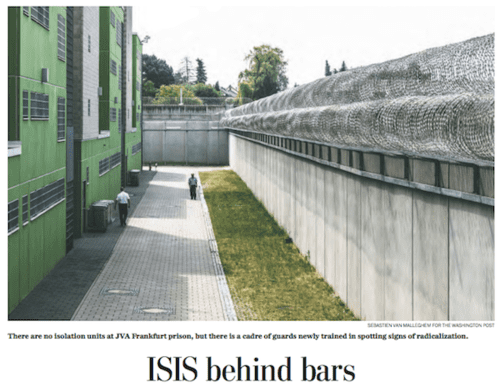 Europe’s Prisons Are a Battleground of Jihad Recruitment

How long did the Washington Post have to search in Europe to find a killer jihadist with a whitebread name like Benjamin Herman? The Sunday paper had a lengthy piece about the problem of Islamic radicalization in European prisons, which is a worthy topic, but it neglects to remind the reader about how and when the jihad problem arrived. Charles Martel defeated an earlier Islamic invasion in 732 at Tours in France, but less wise European leaders, e.g. German Chancellor Angela Merkel, have allowed millions of the historic enemy to take up residence in Western Civilization’s homeland via immigration in the last several decades.

Not every muslim immigrant is a jihadist of course, but some are. And remember that Islam is better understood to be an undemocratic political ideology that includes religion.

The Washington Post’s Sunday front page pictured a Frankfurt prison, where jihadists are not jailed separately, but are free to mix with the other prisoners and recruit for Islam. 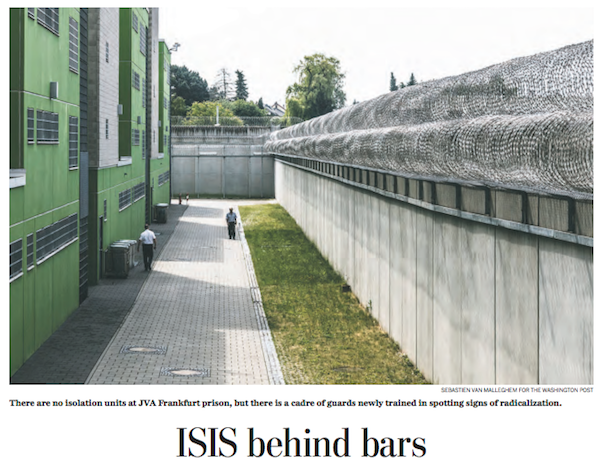 The Washington Post story was reprinted in the military publication Stars & Stripes:

The Post’s Souad Mekhennet visited four prisons in Belgium and Germany to see how officials are trying to stop Islamic State fighters returned from Syria and Iraq from recruiting fellow inmates.

BRUSSELS — A few months before his killing rampage, convicted robber and prison inmate Benjamin Herman had a jailhouse conversion of a sort. A white suburban teen and a nominal Catholic when he was first incarcerated, he emerged in late May as an avowed Islamist who would murder three people within hours of gaining freedom on a work-release program.

Herman fatally stabbed two female police officers during his hour-long attack in the Belgian city of Liege, and then used one of their pistols to kill a passing motorist. Shouting “Allahu akbar,” he seized a hostage and wounded two more officers before being shot dead in a gun battle with police.

Afterward, as the facts about the killings came to light, one biographical detail stood out: Herman, a product of Belgium’s French-speaking middle class, had come under the sway of a group of radical Islamist inmates in prison.

In a country that has acted aggressively to put extremists behind bars as a means of preventing terrorism, the attack stoked fears that Belgium’s policy could be having the opposite effect, creating hotbeds of radicalism and sprouting new generations of would-be terrorists.

“Never have so many people been arrested on charges related to terrorism, and never have we seen so many of these guys in prison together,” said Thomas Renard, a Belgian terrorism expert and researcher at the Egmont Royal Institute for International Relations in Brussels. “In bringing them together, we are facilitating their ability to recruit. And that is something that will stay with us for a long time.”

Across Europe, prisons are the latest battleground in the evolving fight against Islamist-inspired terrorism. Beginning five years ago, Western countries saw thousands of their citizens migrate to Iraq and Syria to join the Islamic State or other Islamist groups. Since 2016, hundreds have returned, but the mood at home has changed. Traumatized by terrorist attacks and a swelling refugee crisis, European countries since 2016 have taken a hard line on returnees, enacting tough laws that require criminal charges and incarceration for anyone who traveled to the Middle East or sought to support Islamists groups abroad. Until 2016, many returnees were simply allowed to go home if there was no proof they had been fighters or involved in terrorist acts.