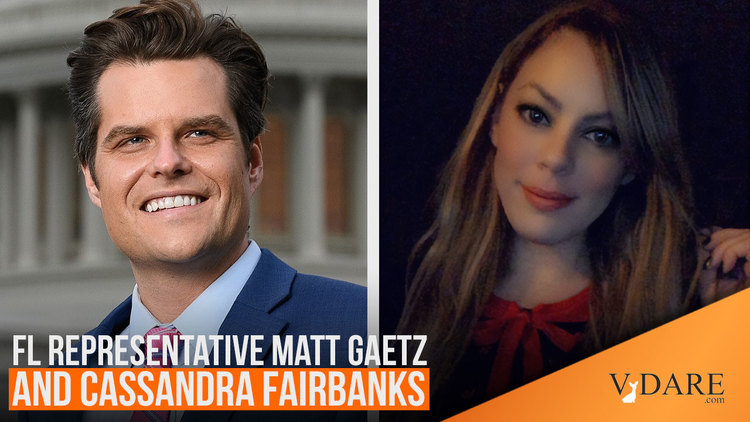 Raw Story's Badash Attacking Matt Gaetz With "Guilt By No Association" With VDARE.com 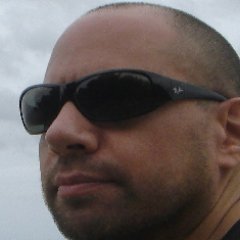 David Badash [Tweet him] is a writer for something called "The New Civil Rights Movement, an award-winning news & opinion site, aka @gaycivilrights." He is not, as far as I can tell, a person of color—although his picture at right seems to deliberately give that impression due to lighting, etc.

He has an attack on Matt Gaetz based, as far as I can see, on Gaetz retweeting something that Cassandra Fairbanks published in Gateway Pundit [Matt Gaetz blasted after standing up for anti-LGBTQ hate group and promoting ‘fascist sympathizer,’ by David Badash, The New Civil Rights Movement (Raw Story) March 25, 2021],

The Southern Poverty Law Center is a hate group.

The @splcenter's designation of @FRCdc as a "hate group" caused a deranged leftist to try and shoot up the Family Research Council's headquarters.

The SPLC is not a hate group.

Fairbanks, according to domestic extremism expert Jared Holt, is a "self-professed fascist sympathizer."...

Gaetz also suggested MAGA is not a dangerous extremist group:

Here, by the way, is what led this Holt guy to brand Cassandra Fairbanks a fascist sympathizer: 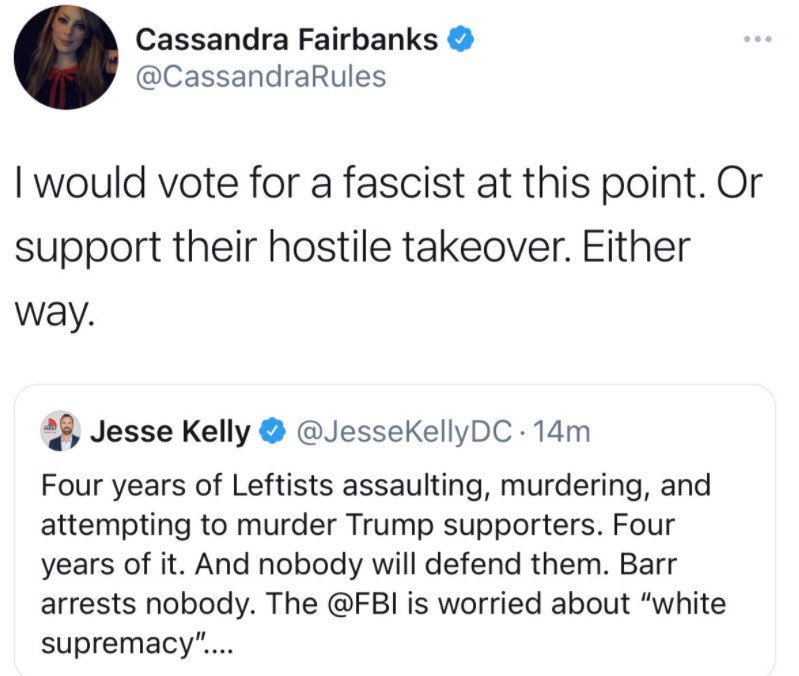 Badash also insists that Family Research Council is a hate group, because they think children should be protected from homosexuals, and gays can be helped to stop having gay sex.

The FRC's "hateful " ideology is what's called Christianity, and their psychological views were uncontroversial in America for many years, and are probably objectively correct.

The success of the Gay Rights movement is what's caused FRC to be labeled a hate group.

Badash even posted a tweet, which you'd think would be banned by Twitter rules, saying that the attack victims at the FRC had it coming. 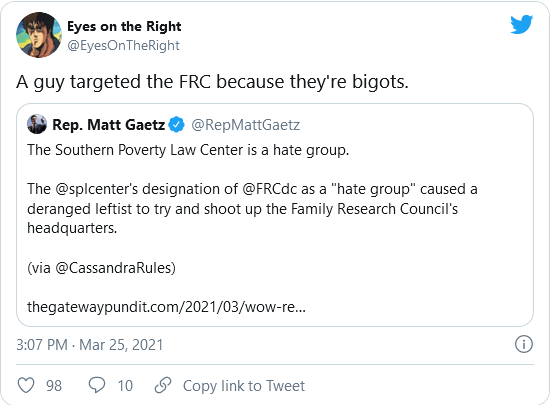 Finally, and this is where we come in:

Journalist Daniel Moritz-Rabson posted a graphic of Fairbanks appearing on VDARE with its founder. VDARE is a white nationalist hate group, according to the Southern Poverty Law Center. 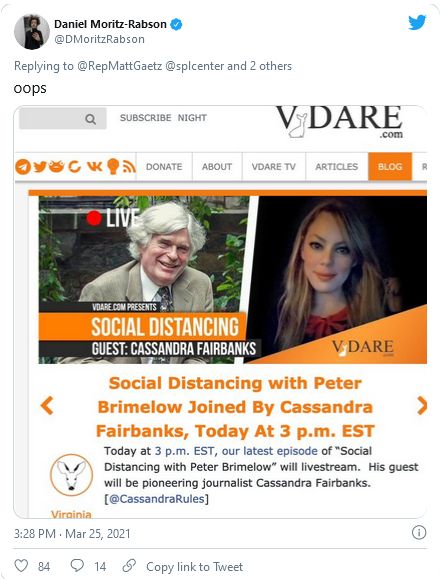 So here's the guilt-by-no-association point. Matt Gaetz, a Republican Congressman is hateful for retweeting a news story (about himself) about a Christian organization that was the victim of a violent SPLC-inspired attack. He's "promoting" by retweeting a journalist who's writing about him, and Goodthinkful people must respond by investigating the journalist...and the people to whom the journalist has given an interview.

So...the Family Research Council was attacked by Floyd Lee Corkins, a black, gay activist, pictured below, in 2012, based on SPLC propaganda:

We wrote about this attack more than once. (Corkins, not a good shot, failed to commit mass murder because he was disarmed by an unarmed security guard whom he wounded in the arm.)

Here's our description of the attack:

On August 12, 2012, gay black activist Floyd Lee Corkins walked into the Family Research Council’s Washington, DC headquarters and shot a security guard in the arm. Fortunately, the guard survived and disarmed Corkins before he hurt anyone else. However, Corkins admitted his goal was to “to kill as many as possible and smear the Chick-Fil-A sandwiches in victims’ faces, and kill the guard.”

Not surprisingly, the Family Research Council and other Christian Right groups blamed the SPLC for the shooting.

What's most annoying about this is that these attacks never link to VDARE.com. Even the guy replying to Gaetz who blamed Gaetz for the fact that Cassandra Fairbanks had been interviewed by Peter Brimelow just provided a screenshot. Watch it below: