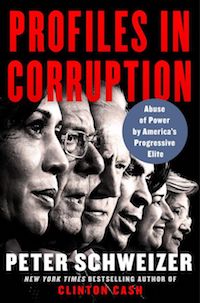 eter Schweizer’s new book, Profiles in Corruption, spends around 70 pages reporting on the Biden family business of using government to become rich as reported here recently, but Senator and Presidential candidate Bernie Sanders is no slouch either.

Mark Levin interviewed Schweizer on his Sunday show, and the author discussed how the Vermont socialist became a millionaire by utilizing government schemes available to members of Congress and those in other powerful positions.

One Washington scam that Schweizer explained centered around media purchases. The person who acts as a candidate’s agent for buying media gets a commission —15 percent is standard — which can amount to a hefty sum in these days of big spending for campaigns. So Bernie made his wife Jane his media buyer to keep the money in the family.

He also created a job for her when he was mayor of Burlington with no authorization or budget from the city council. It’s good to be the king.

These and other government-manipulating strategies for amassing cash are how the socialist man of the people got wealthy.

Of course, such enriching opportunities are not available for ordinary citizens.

MARK LEVIN: We have Bernie Sanders. Bernie Sanders as he calls himself a Democratic Socialist he’s really an out-of-the-closet hardcore socialist when you look at his career. He hasn’t done anything in the private sector that’s been productive, but he’s a multi-millionaire.

PETER SCHWEIZER: That’s right, and it’s interesting; you’re right, he describes himself and his policies are certainly hard core socialist. If you look at his investment for portfolio — this will surprise a lot of people — he’s invested in Fortune 500 companies. He’s not invested in renewable energy companies or socially responsible investment funds. And when you look at his public career since the 1980s as mayor of Burlington, and then a congressman, and then the senator and presidential candidate — it all revolves around bringing money into the family.

So take back to Burlington, Vermont, he is the mayor. One of the first things he does, Mark, as he says I’m gonna hire my girlfriend and put her on the city payroll. Jane Sanders, who’s now his wife was put on the payroll, and you go back and look at the local press accounts and you realize the city council said wait a minute: you’re giving her a job that we didn’t actually create, we haven’t funded and if this position were to exist you never advertised it. You never gave other people the opportunity to to take it, or to apply for it and Bernie just blew him off. So Jane had a paid job throughout his tenure.

When he ran for Congress, he discovered a secret that a lot of Washington insiders know, Mark, which is you can make a lot of money doing media buys for political campaigns. So for example, if you were a candidate for the United States Senate and you wanted to buy a million dollars in advertising and I did that purchase, I would get the million dollars, but the standard practice is I would get to keep about 15 percent as a commission.

She’d make a lot of money doing media buys, so what does Bernie Sanders do? He’s running for Congress in Vermont — he makes his wife Jane responsible for media buys, and we estimate based on the numbers . . . they set up an LLC which they registered at their home in Vermont and the owners were his wife Jane Sanders and their two children.

So it’s quite a cozy setup; so we estimate they probably made $150,000 off of that arrangement — he’s quite the crony capitalist. The big question mark that we don’t know the answer to but we have suspicions comes with the 2016 presidential race. We’re not talking about small media buys now, we’re talking about his campaign spending $83 million on media buys which means the commission is somewhere around $12 million. So who did the $83 million dollars? Where did that $83 million flow?

It went through this company called Old Town Media. Now you look up Old Town Media. It has no website; it has no footprint. It’s registered to a suburban Virginia home on a cul-de-sac. Then you find out who owns this entity — it happens to be two individuals who worked with Jane Sanders doing media buys when Bernie was running for Congress. Now Jane was asked about this by a progressive reporter actually from Vermont during the 2016 election — what did she know about Old Town Media? Did she have any involvement in it?

According the reporter, she hung up the phone.

So the question is, where did that money go? It certainly fits the pattern that we’ve seen with Bernie Sanders who for decades, for about 36 years by our accounts used the phrase, “Our politics should not be dominated by billionaires and millionaires.”

About three years ago he dropped the reference to millionaires because he’s now one, and I think the the big surprise that a lot of supporters will find is this is an individual who talks about socialism certainly has not conducted himself, his investments and and his family life not being interested in each other.

LEVIN: That’s typical of oligarchs in Russia. In these other totalitarian regimes and whether they’re communist or fascist or whatever, it’s one thing for the people, right, but it’s another thing for them, so this is an area the media and Bernie Sanders’ opponent should really pursue, nail it down.

SCHWEIZER: Yeah, absolutely it should, and you know the other thing that comes through in all this, Mark, is if you look in the Vermont press and a lot of the interviews, Bernie Sanders does not dislike or hate all rich people. He only dislikes and hates rich people who are opposed to his agenda.

So you find that there are very prominent wealthy people in Vermont who have vested interests who he goes to bat for all the time at the expense of local people. For example, there’s a gentleman who is creating these large-scale industrial wind farms where they put these big windmills, dozens of them, and if you live next door to it, suddenly you’ve got these huge windmills all around you.

Those landowners sue trying to stop him from building these — which side does Bernie come down on? On the side of Mr. Blittersdorf who’s doing this why because Blittersdorf backs him and is supportive of his campaigns.