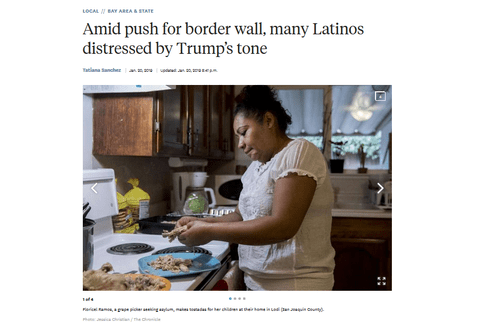 A front-page story in Monday’s San Francisco Chronicle was a common staple in liberal journalism — the illegal alien sob story. In fact, it’s likely that the Trump Presidency will someday be understood as a golden era in the questionable genre.

A frequent touch in sob stories is the excessive use of emotive adjectives and descriptive images to portray the increasing presence of foreign aliens as acceptable, seen here in phrases like “vibrant immigrant community.”

Another distraction from facts is the complaint about the president who characterizes “undocumented immigrants in particular as killers, rapists, drug smugglers and job stealers.”

That approach was bad timing on the day when illegal alien Wilbur Ernesti Martinez-Guzman was arrested in Nevada for the murder of four Americans. That case illustrates that the body count of preventable illegal alien murders continues to mount because the Congress refuses to enact basic public safety on the border.

Below, the Chron pictured an illegal alien described as a “grape picker” preparing Mexican food in her Lodi home to feed her three anchor kids. 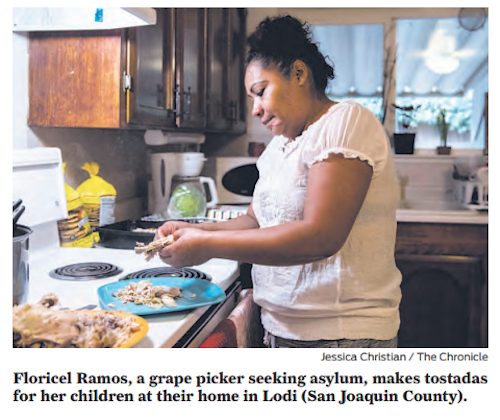 It’s rather unlikely that the taxes (assuming any) from the “grape picker asylum seeker” cover the education and other services that California taxpayers fund for her three anchor offspring — say $11,495 per-pupil in 2016 just for schooling x 3 = $34,485 annually. And why would California take seriously her asylum claim from Mexico when so many Central Americans resettle there because it is safer than their homelands?

In a non-sanctuary state, Floricel Ramos would have already been deported.

Notice how President Trump is presented throughout the article as the problem, not the lawbreaking presence of the Mexican grape picker and others of her ilk.

As a soft rain fell in the Mission District on a recent morning, marking the start of another workday, dozens of the district’s Latino residents shuttled to bus stops while business owners opened up shop, carefully setting up jewelry displays, carting out fresh batches of sweet bread and unpacking fruit along the sidewalk. Mothers carried bundled-up toddlers. Friends met for coffee, speaking freely in Spanish.

This is the vibrant immigrant community that Carmen Sanchez wants President Trump to see. These are the people she wants highlighted in his prime-time speeches, spontaneous tweets and trips to the border.

But since his 2016 election, Trump has often painted a much darker picture of people crossing the border into the United States, characterizing undocumented immigrants in particular as killers, rapists, drug smugglers and job stealers. Trump — who proposed Saturday to extend protections for immigrants who arrived as children or were displaced by disasters in their home countries, in exchange for funding for a border wall — has leaned on that profile heavily in his push for the barrier, saying Saturday, “The lack of border control provides a gateway — a very wide and open gateway — for criminals and gang members to enter the United States.”

But his strategy has come at a cost, immigrants and advocates say. They say the heightened rhetoric has translated into hostility and violence directed at immigrants — whether or not they entered the country illegally — and Latinos in particular. The effects have been profound in diverse regions like the Bay Area, where there are an estimated 1.7 million Latinos, according to census data.

“If the president of the United States is speaking this way of Latinos, then of course some people are going to look at us like garbage, as if we bring in drugs, live off welfare and come here to do bad things,” said Sanchez, 58, a retired waitress who immigrated to the U.S. from Nicaragua in 1981. “That’s not the case. In the barrio of the Mission there are lots of people who came here to work and who own their own businesses.”

Floricel Ramos, an undocumented immigrant from Mexico who has been in the United States for two decades and worked the fields in Lodi (San Joaquin County) picking grapes, said she is apprehensive about leaving her home at times.

“We come here to work and to give a better future to our kids. We want to live in peace,” said Ramos, 39, who has three U.S.-born children. “It’s frustrating that people like the president criminalize us for being here.” (Continues)