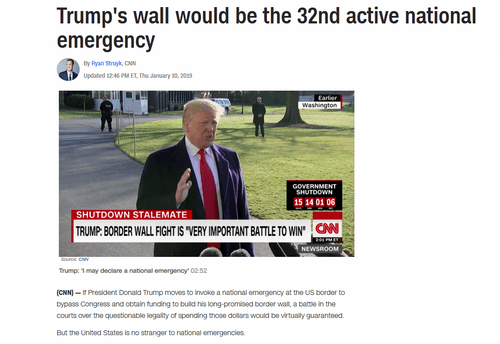 Building The Wall Would Be National Emergency Number 32, And One Of The Few That IS An Emergency

CNN has an article titled Trump's wall would be the 32nd active national emergency, by Ryan Struyk, January 10, 2019. There's a list. I learned this from an article by Julie Kelly on Amgreatness.com, and she writes, after noting that no one was afraid of the National Emergencies Act in the Before Trump times, she writes:

But if Americans now are expected to believe that the NEA suddenly is either unlawful or unconstitutional merely because Trump is president, and his action could portend a dark future of presidential authoritarianism, then the only reasonable step is to eliminate the law. Permanently.

More Than Four Decades of Emergencies
Now that the act is, for the first time in recent memory, an issue of public debate—consequently spawning a whole Twitterverse of experts—it’s fair to assess whether the 42-year-old law should exist at all. Currently we are under a state of 31 national emergencies, including one dating back to the Carter Administration. Another emergency declaration, imposed days after the 9/11 terror attacks, has been renewed on an annual basis.

According to a 2014 report by USA Today, “in his six years in office, President Obama has declared nine emergencies, allowed one to expire and extended 22 emergencies enacted by his predecessors.” This included proclaiming in 2009 that the flu was a national emergency, which allowed for waiving federal rules and set off a public frenzy for flu vaccines. Others deal with national security threats posed by Colombia, the Congo, and Yemen.

There is no doubt the law provides sweeping powers to the president. In a study published by the University of Michigan Journal of Law Reform in 2012, Patrick Thronson criticized the act as “[contrasting] sharply with the traditional conception of the United States as being a government of limited and enumerated powers.” Thronson detailed how the NEA activates “over 160 provisions of statutory law, dozens of presidential orders, and numerous other federal regulations.” This includes the use of the military. He also blasted Congress for being “oblivious” to the implications of ongoing and future national emergencies.

Applying the NEA—much like firing the FBI director or appointing an acting attorney general—is yet another presidential power that the media, Democrats, and anti-Trump Republicans would deny because the president happens to be Donald Trump. If protecting our southern border in order to stop a legitimate emergency that previous presidents also have identified as a crisis, then few, if any, events could surpass this ongoing humanitarian and security disaster that Congress refuses to solve.

If lawmakers on Capitol Hill suddenly are worried about how a Democratic president could abuse the NEA to impose drastic climate change policies or gun control, doesn’t it make sense to repeal the law now? If there is a legitimate and grave national emergency in the future, Congress and the president could address it together as need be.

Our laws are not capricious and subjective: they aren’t enforceable based on whether or not we like, or even trust, the person empowered with executing the law. Either let Trump exercise his legal authority and suffer any political consequences—or repeal the NEA. Congress can’t have it both ways.

Here's the list, via CNN, and as you can see, most aren't emergencies of any kind, but are just designed to prevent various foreign bad guys from escaping with their countries' treasuries. This may be the wrong approach, anyway. In the 90's, Peter Brimelow suggested giving Fidel Castro $5 billion to go away, and stop being dictator. It might be cheaper to let them keep their money, and give up their Army or whatever.

But nothing in here is as serious as the border crisis.