The Trump era will certainly be seen in the future as a golden age for the illegal alien sob story. After something of a fall off during the open-borders Obama administration, there has been a resurgence of the genre with increased coverage by the leftstream media, where front page coverage of illegal alien travails is not uncommon.

Monday’s San Jose Mercury-News story had the standard elements of inflammatory verbiage — “Crackdown breeding fear” — and a sympathetic photo of the foreign perps. The message stresses the Perez family may be “torn apart” by immigration enforcement even though the born-here citizen kid could go to Mexico with dad and the illegal alien siblings to revel in the tribal homeland. 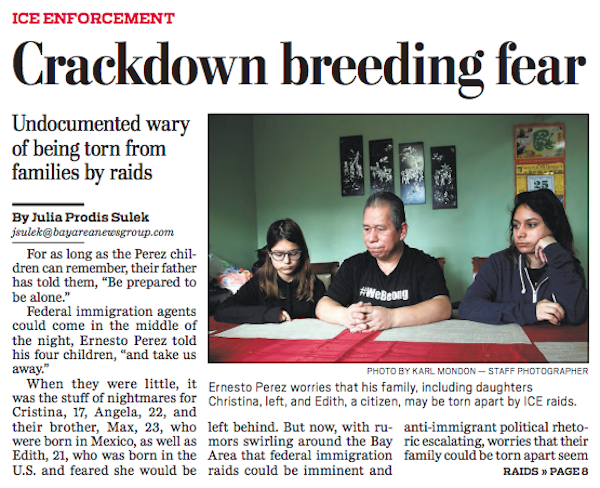 Never forget that illegal immigration is theft. Daddy Ernesto stole a job that by law belongs to an American.

And while janitor may not sound like a great job, it used to be a decent paying occupation before the nation was swamped with illegal aliens willing to work for peanuts. Steven Greenhouse reported in his 2009 book The Big Squeeze: Tough Times for the American Worker that unionized office janitors in 1980s Los Angeles made an average of $12/hour. But a decade later after building owners switched to illegal alien workers, janitor wages had plunged to seven dollars an hour.

In addition, taxpayers are stuck paying for the educations of illegal alien kids. Most don’t come here on their own as we are constantly reminded about “Dreamer” pests, but the dollar cost to citizens is the same. The family arrived in 1995 and returned to Mexico for a time to care for a sick relative, so the number of education years for the kiddies is impossible to calculate. But public school education is the biggest item in the California budget, $45 billion for K–12 schools. The per student cost in 2015 was stated to be $10,467. So state taxpayers were dinged more than $30,000 per year for the illegal alien Perez family members.

We learn from the article that Ernesto told the kids that the feds “could come in the middle of the night” to deport them. Apparently our ICE agents are seen as jack-booted thugs, but the Perez family came anyway for the money and free stuff only — as they all do — not to join the American community.

For as long as the Perez children can remember, their father has told them, “Be prepared to be alone.”

Federal immigration agents could come in the middle of the night, Ernesto Perez told his four children, “and take us away.”

When they were little, it was the stuff of nightmares for Cristina, 17, Angela, 22, and their brother, Max, 23, who were born in Mexico, as well as Edith, 21, who was born in the U.S. and feared she would be left behind. But now, with rumors swirling around the Bay Area that federal immigration raids could be imminent and anti-immigrant political rhetoric escalating, worries that their family could be torn apart seem tangibly real.

Like immigrants across the Bay Area and around the country, their fates lie in the hands of a contorted Congress and a mercurial president who can’t come to terms over immigration legislation.

President Trump’s latest proposal would create a path to citizenship for 1.8 million young undocumented immigrants, known as “Dreamers,” who were brought to the country illegally as children. That’s nearly double the number who were protected under the Obama administration, but Trump’s plan would strictly limit families from bringing relatives — other than spouses or children — to the U.S. and end the visa lottery system. It also would beef up immigration enforcement and set aside $25 billion for a border wall.

The trade-offs generated criticism late last week from both political parties. California’s senior senator, Dianne Feinstein, could have been describing the Perez family when she blasted the president’s latest plan.

“The take-it-or–leave-it proposals put out by the White House will not make our country safer,” she said in a statement, “and will only serve to encourage illegal immigration because families will not be permitted to lawfully reunite.”

Trump’s proposal would protect Perez’s two children who are “Dreamers” — Angela, a senior at Cal State Long Beach, and Max, a security guard at a retailer — and likely the youngest of the family, Cristina, a Silver Creek High School junior who has yet to apply. But it won’t help their father in San Jose or their mother, who doesn’t live with the family.