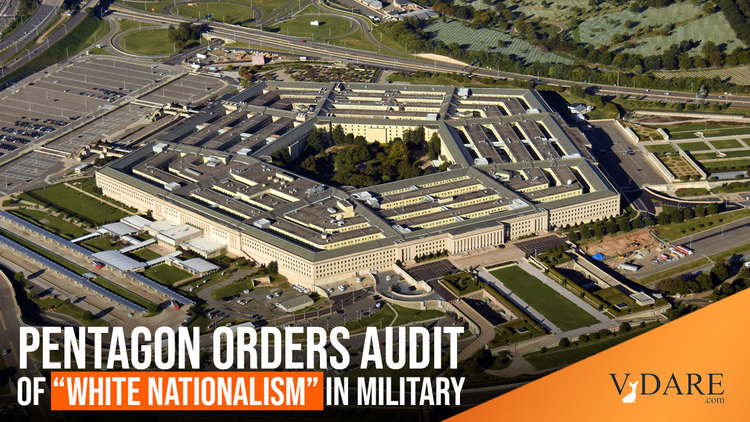 Pentagon Orders Stand Down In Next 60 Days To Address White Soldiers Believing In Constitution, Etc.

“A decline in courage may be the most striking feature which an outside observer notices in the West in our days. The Western world has lost its civil courage, both as a whole and separately, in each country, each government, each political party, and, of course, in the United Nations. Such a decline in courage is particularly noticeable among the ruling groups and the intellectual elite, causing an impression of loss of courage by the entire society. Of course, there are many courageous individuals, but they have no determining influence on public life.” – Alexandr Solzhenitsyn

There’s nothing romantic about what will be written next, but perhaps it’s the only thing worth writing—our job isn’t to reform the system cannibalizing Western Civilization, but to survive its onslaught. But if we survive, we win.

Pentagon, stumped by extremism in ranks, orders stand-down in next 60 days: The decision to a hold a stand-down was made by Lloyd Austin, who made history by becoming the military’s first Black defense secretary after a long career rising in the ranks of the Army, Jerusalem Post, February 3, 2021

The U.S. military on Wednesday acknowledged it was unsure about how to address white nationalism and other extremism in its ranks, and announced plans for military-wide stand-downs pausing regular activity at some point in the next 60 days to tackle the issue.

The decision to a hold a stand-down was made by Lloyd Austin, who made history by becoming the military’s first Black defense secretary after a long career rising in the ranks of the Army. In his confirmation hearing, Austin underscored the need to rid the military of “racists and extremists.”

Pentagon spokesman John Kirby said Austin ordered the stand-down after a meeting with the US military branch leaders, who are under pressure to show progress in combating extremism after current and former military service members were found to have participated in the siege of the US Capitol on Jan. 6.

The Pentagon has yet to define how it will deal with extremism or offer data estimating how many service members hold white nationalist ideology. It has also not disclosed how many troops have been disciplined for extremism.

It was unclear whether the announcement was meant to foreshadow any near-term concrete actions by President Joe Biden’s Pentagon or whether the stand-down was more of a symbolic move, meant to demonstrate Austin’s acknowledgement of the problem and continued resolve.

The Pentagon did not define whether stand-downs pausing regular activity across the US military might last minutes or hours, or what commanders would do during that time to express opposition to extremism.

Anything the elite and The Powers That Be (TPTB) don’t like automatically is labeled as ‘white nationalist’ and immediately is classified as anathema to modernity.

Who would dare argue against such compelling logic and reason, save an individual harboring an insufficient devotion to the pillars of respectability holding aloft contemporary America known as Diversity, Inclusion, Equity, and Tolerance?

Solzhenitsyn lived through the horrors of Bolshevism and tried to warn the West about what a loss of courage meant for our civilization, but his plea for comprehending the vastness of the doom coming our way went unheeded.

Thus, here we are.

White people in the US Military who display an insufficient loyalty to Diversity, Inclusion, Equity and Tolerance are a domestic enemy, and unworthy as individuals defending our nation against the only threat our elite have united to defeat: that, of course, being whiteness.