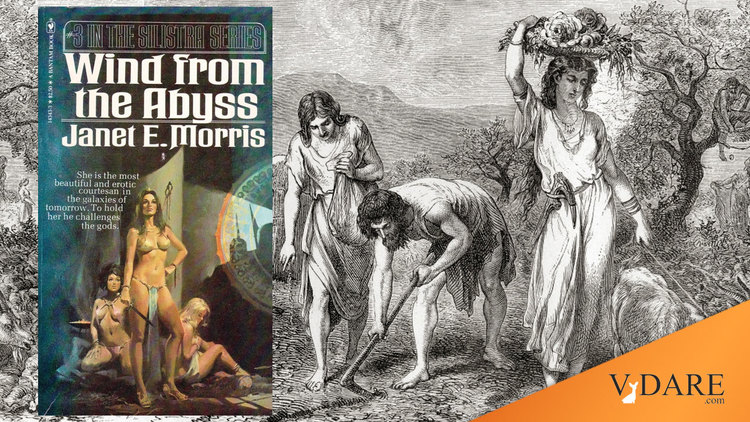 Fantasy Queens Of The Bronze Age

These Bronze Age women were more powerful than we thought

(CNN) Archaeologists working at an ancient complex in southeastern Spain say women probably held political power in the Bronze Age society that ruled the area 4,000 years ago — a sharp contrast with earlier views of the civilization. The team analyzed grave goods found in a princely tomb in the La Almoloya site, in what is now Murcia.
The tomb, known as Grave 38, contained the remains of two individuals — a man between the ages of 35 and 40 and a woman between 25 and 30 — alongside around 30 valuable items, many of which were made from silver.

Most of the objects belonged to the woman, including jewelry such as bracelets, necklaces and earlobe plugs, and a silver diadem.

… Study co-author Cristina Rihuete, a professor of prehistory at UAB, told CNN that being buried under the governing hall would have legitimized the social position of those in the tomb.

Women formed part of the political elite in the highly hierarchical society, Rihuete said — and the implications are significant.

“The role of women in the past was much more important than we have dared to imagine,” she said, explaining that women in El Argar were able to have political power in their own right in a highly violent and exploitative society.

“This says a lot about the process of silencing that women have suffered since,” Rihuete added.

The fact that elite women were buried with such opulent funerary goods points to their important role in Argar society, according to researchers.

“In the Argaric society, women of the dominant classes were buried with diadems, while the men were buried with a sword and dagger. The funerary goods buried with these men were of lesser quantity and quality,” they said. “As swords represent the most effective instrument for reinforcing political decisions, El Argar dominant men might have played an executive role, even though the ideological legitimation as well as, perhaps, the government, had lain in some women’s hands.” 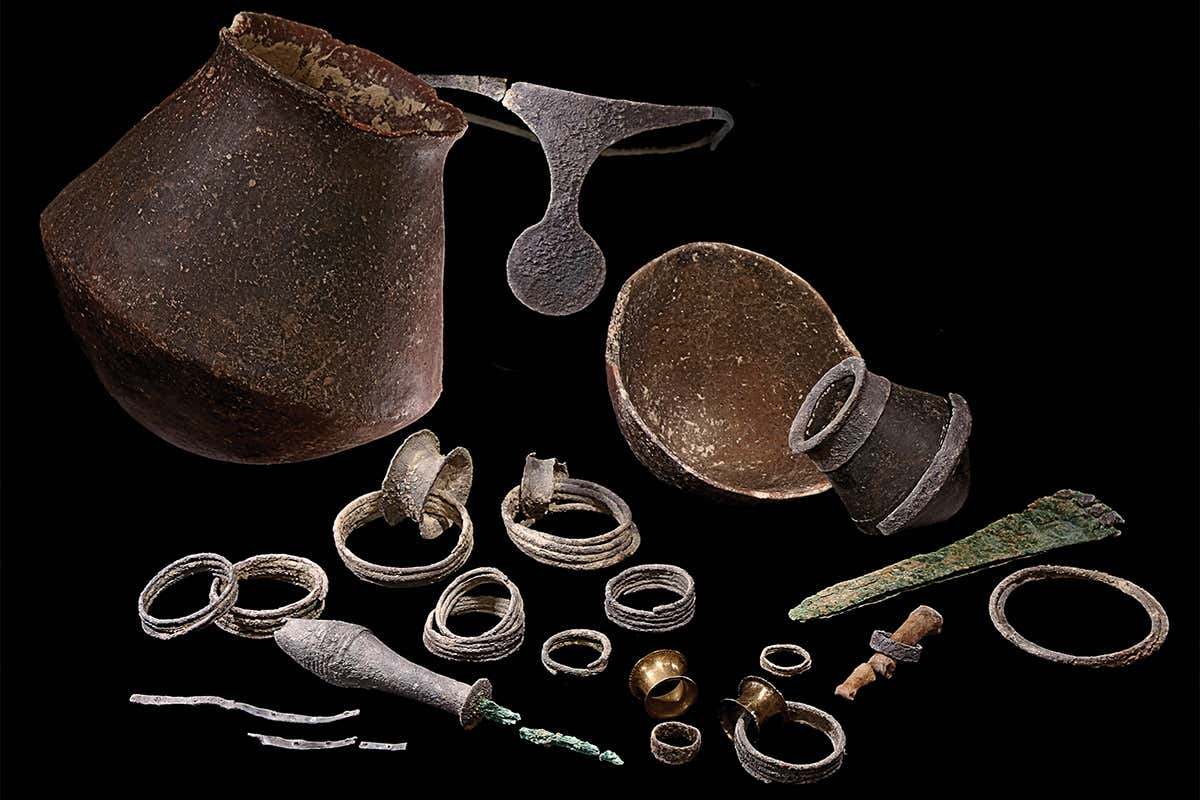 Okay … Or then again, the king had a sword but wasn’t really into jewelry, which he liked giving to the queen.

From the New York Times science section this week:

You Should See Her in a Crown. Now You Can See Her Face.

New research is solving mysteries linked to the La Almoloya burial site and revealing a genetic history of an ancient European people.

This year, archaeologists announced the discovery of a remarkable, 3,700-year-old double burial in Murcia, Spain. Skeletons of a man and a woman were draped in silver — earrings, bracelets, rings and, most notably, a silver diadem that had once gleamed on the woman’s head.

I.e., a Bronze Age king and queen or the like.

The burial site, and particularly the crown and other fineries interred with the woman, hinted at a premodern European culture in which women might have held considerable power.

In contrast to Spain in 1492 where Queen Isabella had no power. Oh, wait …

Western history is full of famous queens who exercised direct power: Artemisia of Halicarnassus, Cleopatra, Zenobia, Boadicea, Isabella, Elizabeth I, Catherine the Great, Maria Theresa, and so forth. Plus, a huge number of queens were politically influential.

There doesn’t actually seem to be all that much correlation between the power of queens and the general status of women in society.

Also, I doubt that there is much correlation between the queenly costume and the level of explicit power. Kings don’t make their queens wear rags when they don’t delegate much power to them.

The skeletons were unearthed in a large ovoid jar in La Almoloya, a key settlement of the El Argar culture, which is one of the earliest examples of a society in Europe with a ruling bureaucracy, geopolitical boundaries and other hallmarks of an advanced state.

Although the gender politics of El Argar continue to be debated, a pair of complementary research projects are solving mysteries at this burial site. One has given faces to the woman, the man and others buried at La Almoloya, while the other is filling out an intriguing genetic history for the El Argar people.

… Understanding the genetic relationships of the Almoloya bodies to others across the Iberian Peninsula was the goal of another study, published on Wednesday in Science Advances. Researchers analyzed the genomes of 67 people buried at La Almoloya, including the silver-crowned woman, and another 33 buried at the Argaric site of La Bastida. The researchers then compared them with the genomes of nearly 200 people found across what are now Spain and Portugal, spanning the years 3,300 B.C. to 1,000 B.C.

This period includes the transition from the Copper Age to the Bronze Age around 2,200 B.C. It was a time of social upheaval across China, the Near East, Egypt and Europe that may have been incited by a century of intense climate change, during which environments became much drier.

Or it might be because steppe barbarians were charging into more settled areas. Why? Were they forced to invade due to climate change? Maybe.

Or maybe they went around conquering because they could.

On the lower Iberian Peninsula, the delineation between the two ages is especially sharp. Copper Age sites contain monumental funerary structures, fortified mega-settlements and artifacts that originated in far-off places.

But this lifestyle was largely abandoned in the early Bronze Age. The El Argar favored large hilltop settlements like La Almoloya, and their burials were more intimate, with just a person or two interred. Their pottery, specialized weapons and bronze, silver and gold artifacts were distinctly different.

The researchers found that Argaric genetics reflected this turnover. Based on DNA extracted from teeth and cranial bones, they discovered that after the transition from the Copper Age to the Bronze Age, the El Argar had genetic links to a population in Central Europe known as the steppe people.

They have a lot of different names, such as Yamnaya, but they are basically Indo-Europeans steppe invaders whom Nietzsche might have thought of as “Aryan.”

The researchers also found a surprising gender divide across the Argaric sites.

Based on their mitochondrial DNA, passed from mother to child, the women and girls were mostly descended from local people.

This can be misleading because it implies that everybody was a first generation—either steppe men or indigenous Middle Eastern farmer-descended women.

Yet the men and boys were overwhelmingly related to the steppe people, and had virtually no genetic inheritance from the local people.

They had lots of autosomal inheritance from local womenfolk but not Y chromosome inheritance.

The men and boys, tracked through their Y chromosomes, belonged to a genetic population now among the most common in Western Europe, but which was relatively new to the Iberian Peninsula 4,200 years ago.

And the La Almolova burial site was 500 years after the steppe conquerors showed up.

About a century after their arrival, these steppe-descended men replaced the local Iberian men entirely — and had many children with the local women.

As researchers studied these genomes, another gender difference emerged as well.

“Males have many relatives at the site, whereas the females have less,” said Vanessa Villalba-Mouco, a postdoctoral researcher at the Max Planck Institute for the Science of Human History in Germany and an author of the study.

Patrilocalism is common in temperate climes.

Of the 30 adult female genomes that researchers sequenced at La Almoloya, not one woman was related to any other woman. They had children — such as the infant daughter of the silver-crowned woman — but they were seemingly otherwise on their own.

Perhaps the wives were brought in from different areas under the king’s command as a political ploy, as in Saudi Arabia.

The site contains no evidence of colonization or violence,

After all, when has human history ever been influenced by violence or colonization?

but it also contains no easy explanation for these genetic relationships.

Maybe all the indigenous men adopted voluntary incelism as their ideology just as the steppe warriors arrived?

and having sequential spouses or, much the contrary, polygamic practices,” Dr. Rihuete-Herrada, a co-author of the genetic study, said.

But the researchers don’t think the genetic discovery contradicts the idea that women held some power in El Argar. One possibility, Dr. Rihuete-Herrada said, is that women in different settlements sent “their daughters as an alliance with other groups that are run equally along female lines.”

David Reich, an expert in ancient DNA at Harvard Medical School, said that such a nearly complete Y chromosome turnover could have happened when powerful local women formed alliances with foreign men. 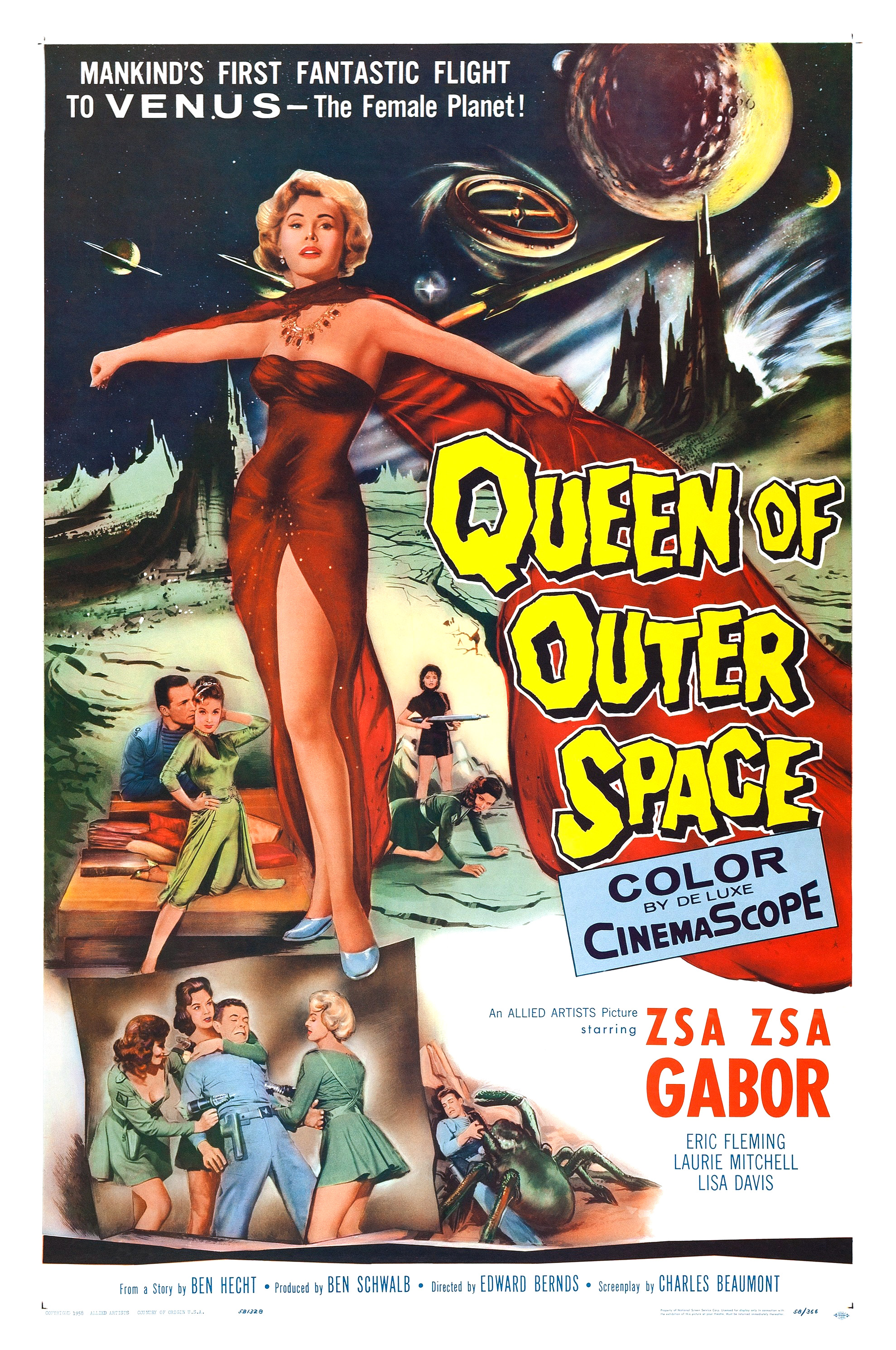 Like in that 1958 sci-fi movie Queen of Outer Space, in which astronauts crash land on a Venus populated by Amazons ruled by a tyrannical queen.

“Maybe they say, ‘Oh, there’s these elite foreign men who have culture or religion or some degree of military power or lands.’ And so there’s a complete or partial rejection of the local male population,” said Dr. Reich, whose data in a 2019 study on the genomic history of the Iberian Peninsula was used in the current research.

Or maybe the elite foreign men with some degree of military power or lands enslaved the indigenes and took their women?

While the study focuses on population genetics at a regional scale, there are details about a few individuals in the data, too. Phenotype analysis suggests that most of them had brown eyes, brown or black hair and generally medium-toned skin. A few were redheads.

And researchers also found evidence of genetic disorders. One infant girl was found to have Trisomy X, or three X chromosomes, which is linked to a number of disorders. Their burials, however, were typical for La Almoloya. The woman with the silver crown, for instance, had the richest tomb as well as a shortened, fused spine and a stunted left thumb.

“What is important here is that people potentially impaired were not treated differently and certainly not excluded,” Dr. Rihuete-Herrada said.

If they were queens.

The next step in their research is to try to establish family links between the people at La Almoloya based on their locations, housing environments and burials, which will inform their understanding of the Argaric social structure, including whether it was patrilineal or matrilineal, Dr. Rihuete Herrada said.

If none of the women at the palace were related, then the elite social structure wasn’t matrilineal.