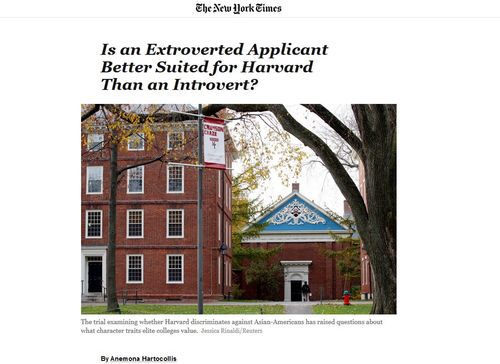 Is an Extroverted Applicant Better Suited for Harvard Than an Introvert?

… There has been much discussion of unconscious bias during the trial, including questions from the judge about whether “tips,” or admissions advantages, can work against some applicants even as they work in favor of others.

It’s like that umpire who declared a homer to be an out last week. He wasn’t hurting the Astros, he was just helping the Red Sox.

Anyway, one of the interesting questions I haven’t heard about being brought up in the Harvard trial is whatever statistical modeling Harvard no doubt has done on what kind of applicants wind up donating the most money to dear old Harvard later in life. Judging from how successful its endowment has been during my lifetime, Harvard isn’t stupid, so it probably knows what it’s doing in terms of its overall admitted class.

My guess, from reading about individuals who write 8 and 9 figure checks to colleges, is that they tend to be Haven Monahans: straight white male legacy jocks.

Harvard has 20 different men’s sports teams including squash, heavyweight crew, fencing, sailing, skiing, and lightweight crew, and clearly being Ivy League quality in one of these sports is a big advantage at getting into Harvard. Why does Harvard give so much consideration to smart, masculine jocks, even though we constantly hear about Haven Monahans being the worst people imaginable? Probably because they tend to make a lot of money and give quite a bit of it to Harvard.

Four years ago, Professor Steven Pinker of Harvard proposed that Harvard solely concentrate on admitting the most academically brilliant applicants:

The Trouble With Harvard

The Ivy League is broken and only standardized tests can fix it
By STEVEN PINKER, September 4, 2014

Why haven’t many Harvard professors come out in favor of admitting the 1600 SAT nerd over the 1400 SAT jock? Presumably because jocks donate more.
[Comment at Unz.com]