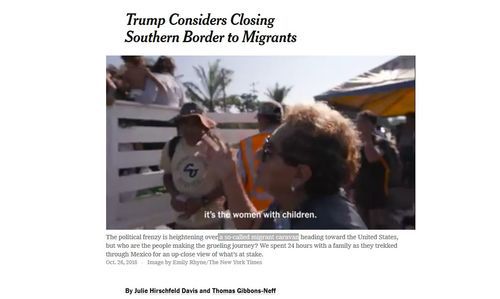 The effort would be the starkest indication yet of President Trump’s election-season push to play to his anti-immigrant base.

It would also be the most drastic in a series of steps he has taken or threatened to take as he works to stoke fears of immigrants.

… The proposal amounts to a sweeping use of presidential power to fortify the border and impose the kind of aggressive immigration restrictions and enforcement measures that Mr. Trump has made his signature pursuit.

I mean, what’s the point of having a border if not to let any random mob march across it?

Commenter kihowi says, “the complaint seems to be that Trump, cynically, is using political issues to sway the election.”

The right of any mob from anywhere to march across our border any time they feel like it is too sacred to let Americans vote on it.
[Comment at Unz.com]