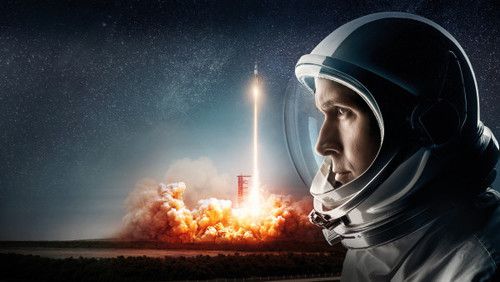 I took Mrs. Mohawk to an IMAX theater on the first day of release.

My wife the Hungarian race realist noticed that there were no black people in the audience. We usually see disproportionate numbers of them in places like movie theaters and malls where this was. They have lots of disposable income and free time, but not for this movie apparently.

The opening scene, and some thereafter, conform to what Steve says: too much shaky camera. Chazelle uses this effect, plus extra dirt on everything, to give his audience the impression that this was tough stuff. Well, the real stuff, “The Right Stuff” was very tough but not quite that grimy, and the pilots all had colliculi, so their instruments didn’t look quite that vibrate-y to them. There were real times, though, when high g-forces threatened to black things out entirely.

Speaking of The Right Stuff, observant fans will catch a glimpse of someone playing Chuck Yeager saying that Armstrong “gets distracted,” right after Neil bounces an X-15 off the atmosphere and recovers. This film shows that, contrary to what Mr. Mach One famously said about the Mercury astronauts that Tom Wolfe wrote about, Apollo men were not “Spam in a can.” They were engineers who studied massive amounts of information, operated complex systems, piloted in the vacuum of space, and solved life-threatening problems when seconds counted.

Really observant movie fans will notice an homage to 2001: A Space Odyssey, when a pen floats loose in the X-15 cockpit.

This film is historically accurate. Every aerospace event depicted happened, and all of Armstrong’s impressive saves are shown. Yes, he did that. Since this is a movie, however, everything just necessarily goes by quickly.

Sets, props and costumes are right too. Space capsules are correctly cramped. The wood-paneled Armstrong household appears as it was (the astronaut’s sons Mark and Eric consulted on this).

The moon walk scene is as realistic as it can be, but it might not be worth the price or trouble of going to an IMAX theater. It is the only part of the film that was shot with an IMAX camera. If you are someone who has seen practically every Hasselblad photograph, every 16mm film, and every television transmission from the Moon, you don’t need to go to the extra trouble. You might even notice things that are slightly off.

This movie is not entirely about space anyway. It is also about Whitey. It even includes Gil Scott-Heron’s poem, “Whitey on the Moon,” which was recited during protests at the time. A mercifully brief effort is made here to show the unrest of the 1960s. Fifty years ago, blacks were shouting that money should be spent on them instead of on Whitey’s “giant leap for mankind.” Nothing has changed. Today, reviewers are lamenting the fact that this movie is very white. Well, white men went to the Moon, okay?

The book on which the film is based, First Man, The Life of Neil A. Armstrong, was written by historian James R. Hansen. It is the only authorized biography of Armstrong. As such, it is The source, and it will be that for as long as there are such creatures as historians. That makes it an important book. Neil Armstrong, a humble, white American from Ohio, was the First Man to stand on another world — and he will be that forever. It took Hansen two years to convince his subject that yes, maybe there should be a biography.

Ryan Gosling’s difficult task was to portray emotions in a man who was known for not displaying any. In one scene he cries, convincingly, but who knows when Neil ever did? What we do know from the biography is that Armstrong’s sister, June, told Hansen that the death of Neil’s daughter, Karen, “crushed him.” In real life, the man said little to anyone about this loss, but the little girl’s death is a poignant thread that runs through the film.

Hansen speculated that Karen’s death might have been a factor in Neil’s decision to make a career change and apply to be an astronaut, and the movie blatantly portrays that as the sole reason. The truth, however, is not clear. Armstrong was already a NASA pilot, and his own boss urged him to apply.

There is no evidence, either, that Armstrong did the one sentimental act depicted on the Moon in the film. It is pure conjecture cooked up to conform to the aforementioned thread — and to make you cry.

If you are getting the picture that Armstrong’s story is best told in words, you are right. The cool truth cannot be shown on 138 minutes of film. The man himself said, “I guess we all like to be recognized not for one piece of fireworks but for the ledger of our daily work.” Nevertheless, this is an enjoyable, successful movie, sure to make Oscar news. The effort and talent that went into it are obvious, and only the necessities of film entertainment hold it back.

First Man succeeds in showing that Armstrong, his family and colleagues were, in many ways, typical Americans of their time. We are treated to a re-creation of their suburban, Houston life. Fake controversies about flags aside, the film makes it obvious that these were Americans who did those great things. They represent what we were, and what we should still be. What they did says all you need to know about what Americans can do. Like many of us, they were part of something much bigger than themselves — mothers rearing children, fathers chasing goals and sometimes dying.

Death is an undercurrent here. Neighbors and friends get killed on the job. The wife across the street suddenly becomes a widow; her children instantly become fatherless. That was the life of test pilots, astronauts, and their families.

Between tensely-smoked 60s cigarettes, Claire Foy gives an Oscar-nominatable performance, acting out family drama that might or might not have happened. Those who control Hollywood require movies, even movies about heroic men, to have this stuff. “I am astronaut’s wife. Hear me roar.”

Foy storms into Mission Control too, something the real Mrs. Armstrong actually did, to give the guys a piece of her mind when they cut off her audio connection to Gemini VIII. Her husband was struggling with a spaceship spinning out of control; he and co-pilot Dave Scott, another future moonwalker, were seconds away from blacking out forever.

There is another connection to Kubrick’s 2001 here. Like Keir Dullea (astronaut Dave Bowman) in a Space Odyssey, Gosling’s Armstrong has gone from our Flatland world into another dimension, through that rectangular world of the movie screen. At the time of Apollo 11, there was intellectual talk about it being an evolutionary step analogous to when the first amphibians crawled upon land. Here Armstrong, like Bowman, has made a “giant leap” in evolution, and we can’t quite be there with him.

Like the moon he visited, Neil Armstrong was distant. He remained so for the rest of his life, while the world tried to make contact with him. Now Hollywood has tried to do the same.

Mrs. Mohawk liked the movie more than I did. Since she likes to watch stuff that women like to watch, I must conclude that Chazelle has succeeded in making a film about a male-oriented subject, with lots of cool stuff, while at the same time selling the story to women and checking most of the boxes required today. It’s still all about Whitey, though.