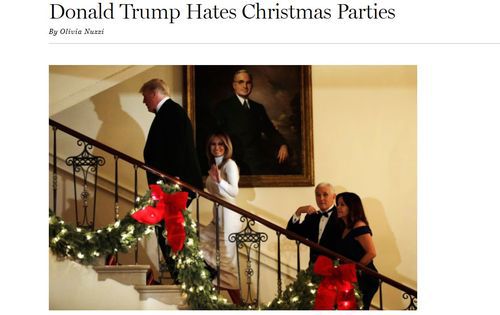 No, Donald Trump Doesn't Hate Christmas Parties Because They're "Not About Him"

President Trump, because he is the president, will attend 21 Christmas parties this month, which is a lot of parties, even for a cheerful, party-friendly guy like Trump, and New York Magazine’s Olivia Nuzzi claims, based on two anonymous sources, that he hates it:

This is the life of a modern president of the United States in the month of December—and Donald Trump hates every minute of it. While he is known to enjoy hosting large social events and rallies, current and former White House staffers say he regards presidential Christmas parties with a special loathing and goes out of his way to escape early. Making Christmas great again may have been a pillar of his presidential campaign—“We’re going to start saying ‘Merry Christmas’ again,” he often promised—but the war on Christmas is now raging inside of him.

One person close to the White House told me, “It makes perfect sense” that Trump hates the entire production surrounding Christmas, “because it’s not about him!” This person added, “If it were about him, he’d love it. Christmas is not about him.”

“It’s just a lot,” a senior White House official told me. “They’re hosting all these people, half of whom they don’t know,” the official said. “He just gets impatient. He likes to go go go. Sitting through things, he gets restless.”

On CNN, Nuzzi  came up with  a further claim from her "anonymous source":

Nuzzi shared her theory following an interview with an anonymous White House source that Trump does not like the holiday party season because "the topic is not Donald J. Trump."

"This person went on to say that Christmas is about, I think they said, quote, the Lord Jesus Christ and it's not about Donald Trump," Nuzzi said of the White House source. "And that may explain his sort of aversion to celebrating this on a regular basis. I don't know if that's true, but this person does have more insight perhaps than I do or any other reporter does based on who they are. But it wouldn't surprise me to talk about Christmas all the time. I don't think -- he's not very good at staying on topic when the topic is not Donald J. Trump."

Olivia Nuzzi: Trump Hates Christmas Parties Because They Are Not About Him By Ian Schwartz, RealClearPolitics, December 19, 2018 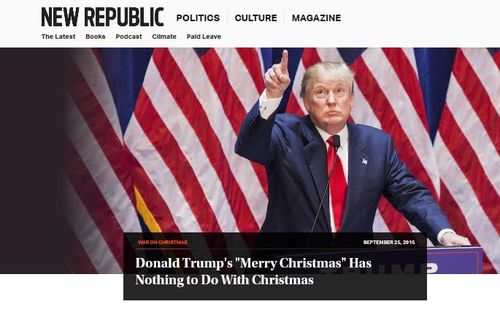 Of course,  Nuzzi may be just making this up. As the recent German case shows, we have no idea how much of what appears, anonymously sourced, in the MSM is just fiction. But even if she was actually told this by a real person, it just means that Trump is surrounded by back-stabbing snakes.

Trump is, as Nuzzi, said, on the side of the angels in the War On Christmas, and is hated by the MSM for it:

However, the first thing I thought of when I thought of Trump and Christmas was the mortgage-burning party he held in the lobby of his building for a Georgia farm widow who would have lost her farm if Trump hadn't raised the money to save it. Ann Coulter wrote it up in 2016:

In 1986, Trump saw a TV broadcast with Annabell Hill, whose 67-year-old husband had committed suicide 20 minutes before their family farm was to be auctioned off in a foreclosure sale, hoping the life insurance money would be enough to save the farm. It wasn't.

Trump immediately called Annabell, promising to save her farm and pledging $20,000 toward the effort. "Last night when he called, my heart went pitter patter," Annabell told ABC's "World News Tonight." "I never talked with a man with that much money before. And he assured me that one day the land would be mine. I thought, after I hung up, 'This can't be true, this just can't be true.'"

As Trump explained to The Atlanta Constitution at the time, "I've seen what's happened to farmers, but I was particularly interested in a lovely woman I saw, Annabell Hill."

Within a month of Trump's launching a national campaign with two other businessmen to save Annabell's farm, they had raised more than $100,000. One of the businessmen, Frank A. Argenbright Jr., said, "That is thanks totally to Mr. Trump and his organization. Most of the money has come from the New York area."

By Christmas that year, Annabell and her entire family flew to New York to burn the mortgage in the lobby of Trump Towers and have Christmas dinner with the Trump family. The lovely Annabell said, "Well, we have a real celebration not only to celebrate the birth of Jesus but also to celebrate the goodness in men's hearts."

The screenshot below is from Nuzzi's New York Magazine: 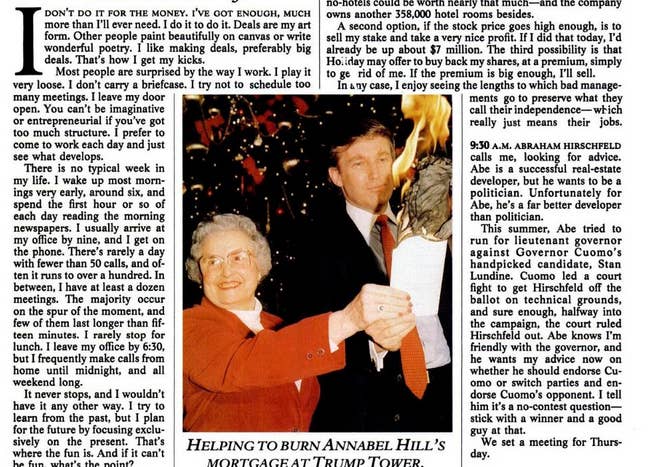