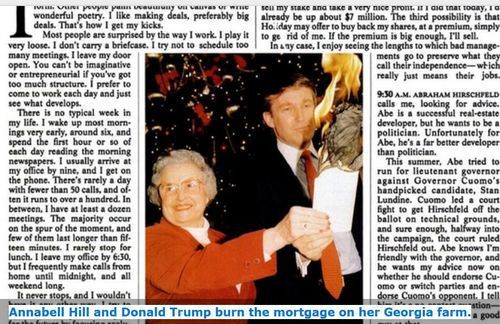 Yes, Conservatism, Inc., Trump Is Not A "Real Republican"—He's A Real AMERICAN

We have never had total war against a candidate like we're seeing with Donald Trump. All elements of national media are uniting to stop him.

Look for a fake Trump scandal to break—probably from a conservative news outlet—right before the Iowa caucus.

A few months ago, an alleged Trump quote from a 1998 People magazine interview was circulating on the Internet, claiming Trump said that if he ever ran for president, he'd run as a Republican because Republican voters are "the dumbest group of voters in the country. They believe anything on Fox News. I could lie and they'd still eat it up."

I pay a lot for Nexis, and Trump has never said anything remotely resembling this. Snopes.com investigated, too, and also concluded the quote was a fake. But you can probably still find some idiot tweeting it out right now.

Last week, Glenn Beck "retweeted" a post allegedly tweeted by Trump the day after the 2012 election, saying: "I always vote for the winners! Congratulations to My Friend, @BarackObama!"

If that doesn't sound like Trump, it's because Trump never said it. Beck's retweet sure made it look real, but you can check Trump's Twitter archive.

All the stories about Trump being a fraud keep turning out to be the real frauds. I assume that, like most sentient beings, he's changed his mind about some things. But the one consistent thread running through his entire life is his love for this country and his fellow Americans.

The attacks on Trump from the "conservative" media calling him a socialist, a Democrat, a flip-flopper, a fake conservative are just name-calling. I notice that the accusers never include examples, not true ones, anyway. Here are some examples of how Trump has always been for Americans first. Wouldn't it be nice to have a president who likes us more than he likes foreigners—and the rich donors who employ them?

In 1986, Trump saw a TV broadcast with Annabell Hill, whose 67-year-old husband had committed suicide 20 minutes before their family farm was to be auctioned off in a foreclosure sale, hoping the life insurance money would be enough to save the farm. It wasn't.

Trump immediately called Annabell, promising to save her farm and pledging $20,000 toward the effort. "Last night when he called, my heart went pitter patter," Annabell told ABC's "World News Tonight." "I never talked with a man with that much money before. And he assured me that one day the land would be mine. I thought, after I hung up, 'This can't be true, this just can't be true.'"

As Trump explained to The Atlanta Constitution at the time, "I've seen what's happened to farmers, but I was particularly interested in a lovely woman I saw, Annabell Hill."

Within a month of Trump's launching a national campaign with two other businessmen to save Annabell's farm, they had raised more than $100,000. One of the businessmen, Frank A. Argenbright Jr., said, "That is thanks totally to Mr. Trump and his organization. Most of the money has come from the New York area." 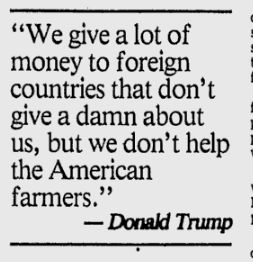 By Christmas that year, Annabell and her entire family flew to New York to burn the mortgage in the lobby of Trump Towers and have Christmas dinner with the Trump family. The lovely Annabell said, "Well, we have a real celebration not only to celebrate the birth of Jesus but also to celebrate the goodness in men's hearts."

Thirty years ago, Trump wasn't thinking about running for president. And yet, this is how he explained his campaign to save Annabell's farm, as quoted by The Associated Press: "We give a lot of money to foreign countries that don't give a damn about us, but we don't help the American farmers."

Two years later, Trump was interviewed by Larry King at the 1988 Republican National Convention. Please look up this interview—it's fabulous. [VDARE.com: It's below!]

Two things will be of particular interest. First, watch how Trump keeps circling back to praise Dan Quayle. King doesn't even ask him about Quayle—a figure of media ridicule at the time because of his Midwest conservatism. It's Trump who keeps doggedly bringing up Quayle, in order to say, he's a "very impressive guy" who did "a great job—I don't mean a good job, I mean a great job."

Second, Trump expressly rejects King's characterization of him as an "Eastern Republican," or a "Rockefeller Republican," saying the people he does best with are "the taxi drivers and the workers."

Trump's business is real estate, and real estate can't be outsourced. His flag is planted in this country. If America goes down, his empire goes down.

Conservative pundits keep assuring clueless viewers that Trump is not a "real Republican." They seem not to grasp that most viewers are saying, That's fantastic! Thanks for reminding me. (I look forward to conservative talk show hosts 20 years hence billing themselves as "Trump Republicans.")

Looking at what the party has become, I certainly hope he's not a "real Republican." I know he's a real American. Those used to be the same thing.