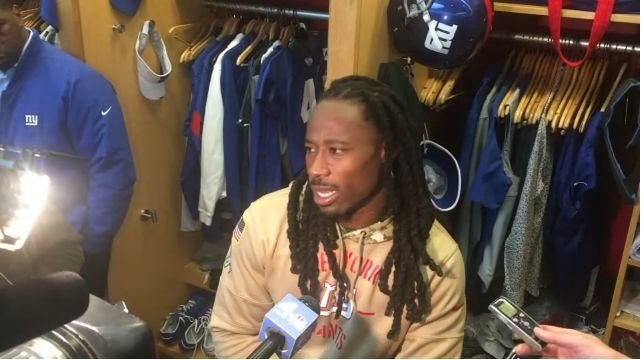 NFL Team Is Shocked, Shocked That Cornerback Uses "Retard" as a Noun

The New York Giants waived cornerback Janoris Jenkins on Friday, two days after he made an inappropriate remark to a fan on Twitter.

On Wednesday, Jenkins called a critical fan a “retard” when taking exception to questioning about why the stats Jenkins was using to showcase his effectiveness weren’t contributing to victories.

Jenkins said Thursday that the usage of the word was “slang” that is “just part of my culture.”

What culture is NFL cornerback Janoris Jenkins? I don’t have a clue … He could be Samoan, white, South Asian …

Nah, just kidding. All 64 starting cornerbacks at the beginning of the last 16 NFL seasons have been black.

(For background, a cornerback is a football defensive back whose job is to guard one of the offensive team’s best wide receivers. The job is to inflict the maximum disruption of the offense’s carefully designed passing plays.)

Giants coach Pat Shurmur met with Jenkins on Wednesday and said in a statement Friday that Jenkins’ refusal to admit that what he did was wrong led to his release.

Hmmhmmmhh … an NFL cornerback who is aggressive, hostile, and self-assured … That’s NOT the kind of cornerback we want on this team! Here at the New York Giants, we like our cornerbacks meek and mild. We want them to sound like old NPR Morning Edition announcers.

The Giants are 2-11 this year and probably aren’t going to be a whole lot better next year, so why pay a 30-something defender $11.25 million when you can wriggle out of your contractual obligation by being shocked, shocked that he used the word “retard”? (Let me know if I’m misinterpreting the contractual implications.)

… “I regret it. But at the end of the day, it’s my slang,” Jenkins said. “So if you take it how you’re going to take it, it’s on you. I don’t mean to offend nobody. My dad always told me, ‘Speak freely and own up to what you say.’ So I always speak freely as a man, and I speak how I want to speak.”

Something must be done about the Cornerback Menace. They don’t seem to be as easy to intimidate into submission as everybody else these days.