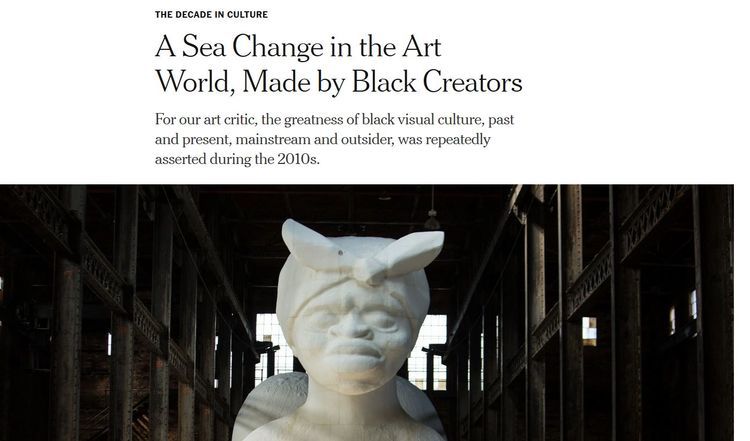 New York Times editor Dean Baquet announced a new drinking game for readers: the name “Emmett Till” will be randomly inserted into stories, especially End of the Decade coverage, and anytime readers stumble upon St. Emmett’s sacred name, they are entitled to pour themselves a stiff drink.

For example, here is the end of the decade write-up on the New York art scene:

THE DECADE IN CULTURE

A Sea Change in the Art World, Made by Black Creators

For our art critic, the greatness of black visual culture, past and present, mainstream and outsider, was repeatedly asserted during the 2010s.

What made the 2010s the most thrilling of all the decades I’ve spent in the New York art world was the rising presence of black artists of every ilk, on every front: in museums, commercial galleries, art magazines, private collections and public commissions.

During this exhilarating sea change new talent emerged, older talent was newly appreciated and the history of American art was suddenly up for grabs — and in dire need of rewriting.

...But if my 2010s had a hinge point, it was the firestorm around “Open Casket,” a painting by Dana Schutz in the 2017 Whitney Biennial. Ms. Schutz, who is white, had based it on famous photographs of the battered body of Emmett Till, the black teenager from Chicago who was lynched in Mississippi in 1955 on fabricated allegations of flirting with a white woman. The photograph was taken at Till’s funeral where his mother had insisted on an open coffin so that, as she said, “all the world could see.”

The arguments about the painting focused on whether a white artist should portray, much less exhibit, a subject so deeply traumatic to African-Americans, and the incendiary demand — first made in a public letter by the artist Hannah Black — that the painting be destroyed. In the end the debate over artistic freedom seemed less important than the intensity of the anger: the speed and starkness with which it illuminated white obliviousness and entitlement.

For many white people, this writer included, the furor was life-changing, as much as I disagreed with Ms. Black. Telling artists what they can and cannot do may come back to bite you. But the uproar made me see that many artists create work that they realize should not be exhibited, which probably should have been the case here. Altogether, I am grateful for the extremeness of her stance. It broke open something that had needed to be broken open for a long time. One immediate outcome was the 2019 Biennial, with its high percentage of female artists of color.

This is but the barest outline of the important changes of the 2010s for art.

Wokeness is basically a Jobs for the Black Girls program, so if you aren’t a black woman, like Roberta Smith is not, you’d better push Wokeness at all costs to hold off the day they come for you and your job.

You can tell that Roberta Smith is a holdover white woman taking up space in a sinecure that really ought to be filled by a Woman of Color because the word “hair” never appears in her article.

If you want a vision of the Woke future, imagine a Woman of Color talking about her hair – forever.

Post
Minneapolis Police Department Tells Citizens: "Despite All Our Efforts, Robberies May Still Occur! Do Not Argue or Fight with the Criminal. Do as They Say. Your Safety Is Most Important!"
MORE...
POPULAR TAGS