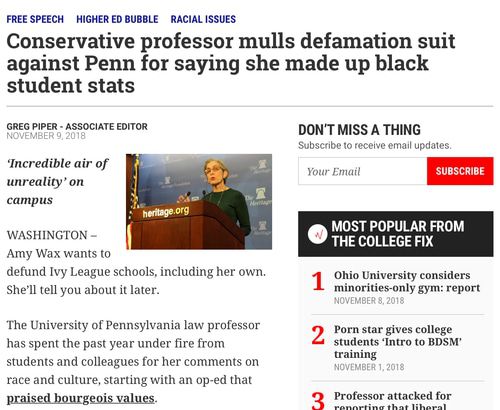 According to The College Fix, Professor Amy Wax is threatening to sue her university for defamation over a controversy in which she remarked on the low graduation standings  of blacks at her law school. 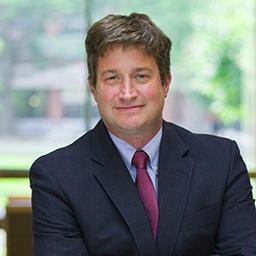 While Wax’s dean pulled her from teaching mandatory first-year classes in retaliation for her comments on black students, “I am not going to be fired” even though some colleagues think she’s the “first cousin to Satan,” she said.

Wax has discussed suing the school for defamation with one of her biggest boosters, former Penn Law trustee and major donor Paul Levy, she said.

“I think it would be fairly easy” because Dean Ted Ruger (left) accused her of inventing statistics on black student performance that she can factually back up. The problem is she would have to sue by March to meet the statute of limitations and go through state court, which is a pain, Wax said.

Penn Law administrators are so eager to avoid any further tussles with Wax, she said, that she was let out of even more teaching at her request, with no dock in pay.

Instapundit, linking to this, said "Prediction: Penn will cave rather than face discovery on its admission stats. "

When Wax said in a podcast that she's rarely seen any blacks in the top quarter of graduating classes, and very few in the top half of her Civil Procedures class, her boss called her a liar, and said she was violating confidentiality.

The point here is class rank is a deep secret at Penn Law, and so are admissions stats. How bad are the blacks being admitted to Penn Law? Enquiring minds want to know, but aren't going to be told.

Somewhere deep in a file drawer, or on a computer server humming away in a basement, are thousands upon thousands of numbers, with names and identities attached. They're called grades. They represent an objective reality, which exists independent of what people want reality to be. They sit silently, completely indifferent to indignation, angry petitions, irritable gestures, teachers' removal from classrooms—all the furor and clamor of institutional politics.

She also quoted Philip K. Dick's famous line that "Reality is that which, when you stop believing in it, doesn't go away." The thing is, if she had the money to sue Penn Law over this, the reality of their diversity admissions could be unlocked by the process of "discovery" and a subpoena.

A subpoena is also something that, when when you stop believing in it, doesn't go away. If necessary, officers of the court will get the police to use battering rams. Try not believing in them! So it wouldn't be surprising if Penn Law would pay a lot to make this go away.