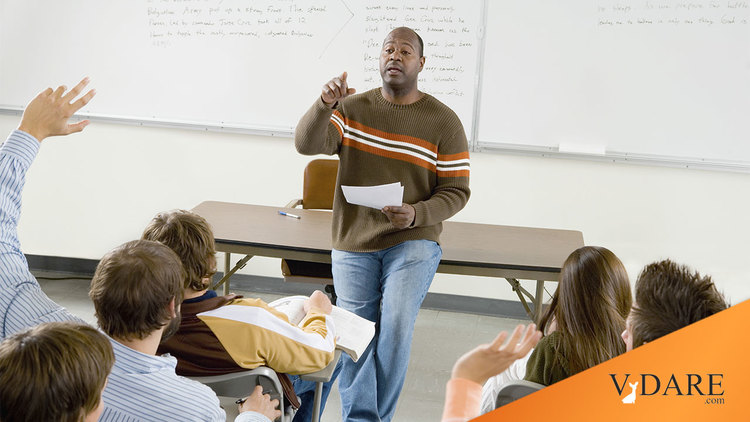 When she was hired as a professor by Harvard University in 2013, Lorgia García Peña was the only Black Latina on a tenure track in the university’s Faculty of Arts and Sciences.

Great! What is her field? Bioengineering? Applied Mathematics? Linguistics? Oh … From her Harvard bio:

Prof. García Peña is the author of The Borders of Dominicanidad: Race, Nations and Archives of Contradictions (Duke University Press, 2016) a study of the impact of stories — historical and fictional — on the national and racial identity of a people. Offering the Dominican experience as case study, this book shows how the stories of a nation create marginality through acts of exclusion. These exclusionary acts are linked to the tensions between colonial desire and the aspiration for political independence. The book also shows how these official stories of exclusion, though influential in shaping a country’s identity, are always contested, negotiated, and even redefined through acts of resistance linked to the tensions between history — what is perceived as evidence of fact — and fiction — what is presumed to be invention: cultural productions, oral histories, and rumors. ….

Ongoing book-length project. Translating Blackness: Migrations and Detours of Latinx Colonialities in Global Perspectives engages various geopolitical spaces: Latin America, the United States and Europe, providing a new cartography for understanding contemporary Latinidad as resulting from the vaivén of peoples and ideas across geographical and imaginary spaces. Specifically, my research analyzes how black Latin American migrants and their descendants grapple with various racial systems finding ways to translate racial meaning across national contexts while carving a space of belonging and representation within the nation(s) that often exclude them. The book historicizes Afrolatinidad as a productive category of contestation but one that is also restricted by colonial regimes that continue to operate in the nation.

But in 2019, she was denied tenure even though her department chair and two deans had told her that she should apply for early tenure.

… Denying them tenure is functionally equivalent to having MVP-caliber athletes on your roster but sending them to play for another team.

…But the other reason these cases sparked outrage is that they shined a light on a larger problem that lurks beneath the surface of academia. It’s a problem that academia — like the rest of American society — doesn’t like to acknowledge: Academia has a problem with race.…

But despite all of the talk about increasing diversity, it does not seem like universities have made much progress — at least when it comes to the diversity of the tenure-track and tenured faculty.

Maybe the reason universities can’t hire more genuine black or Latino professors (as opposed to the ever increasing numbers of DIE bureaucrats) is because they’ve already been scraping the bottom of the barrel looking for them as hard they can for the last 50+ years?

Similarly, colleges are having a hard time adding black and Latino faculty because students don’t want to major in career-killing fields like Latinx Studies that come with a giant warning sticker on their resumes: If You Hire Me, I Will Do Nothing But Complain and Then I Will Sue You.

Colleges would love to hire black Latina computer science professors, but…they barely exist. And when one with the talent comes along, Google pays more than a college can.